Pompeo said, “We are very hopeful that there can be a transition in Venezuela and we the CIA is doing its best to understand the dynamic there.” | Photo: Reuters

Venezuela’s foreign minister condemned CIA schemes to overthrow the government of President Nicolas Maduro, denouncing the CIA’s dealings with foreign governments such as Mexico and Colombia to manipulate events in Venezuela.

Samuel Moncada took to Twitter, posting notes from a question posed by Vanessa Neumann, president of Asymmetrica — a business intelligence firm — to CIA Director Mike Pompeo during an extended briefing, where Pompeo said, “We are very hopeful that there can be a transition in Venezuela and we the CIA is doing its best to understand the dynamic there.” 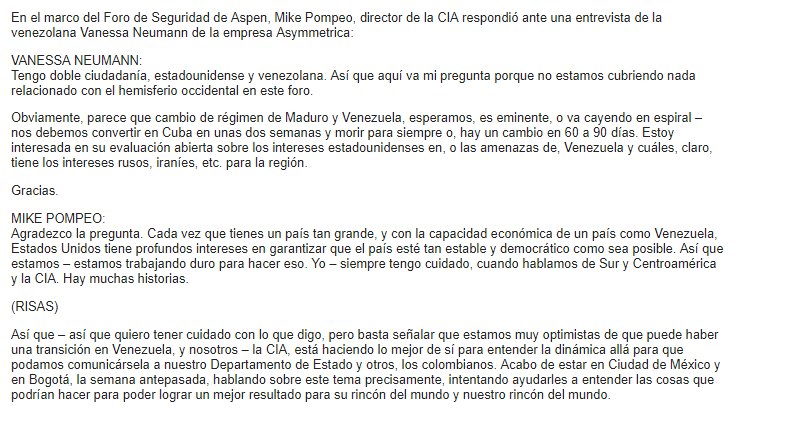 “The head of the CIA says he works with Colombia and Mexico to overthrow the democratic government of Venezuela.”

Pompeo added, “America has a deep interest in making sure that (Venezuela) is stable, as democratic as possible … The Colombians, I was just down in Mexico City and in Bogota a week before last talking about this very issue trying to help them understand the things they might do so that they can get a better outcome for their part of the world and our part of the world.”

Following a U.N. meeting with the chief of staff of the U.N. Secretary General in New York City, Moncada said he alerted the official of U.S. maneuvers to destroy democracy in Venezuela.

“We explain the violations of international law by the United States against the Venezuelan people to the Chief of Staff of the SG-UN.”

Moncada called the pending threats from President Donald Trump to take “take strong and swift economic actions” in the event that the National Constituent Assembly election vote takes place on July 30 as “anti-democratic, unhumanitarian, and imperialistic.”

The diplomat commented that Venezuela hopes to work with the United Nations under the foundation of respect and cooperation to counter the matrix that has been built against Venezuela.

Vice President of Parlasur Daniel Caggiani also emphasized Monday the importance of not intervening in the “internal situation” in the country. “Venezuela is of concern to us, but I think it is not good for the bloc itself to comment on the internal situation in the South American country,” he said to Radio Uruguay.