US Pentagon: ‘Brazil Should Lead Solution to Venezuela Crisis’ 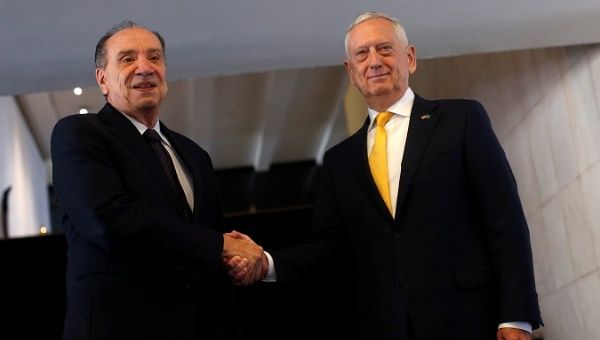 August 14 (teleSUR) James Mattis, the United States Secretary of Defense, said Monday that Brazil should lead the “solution” to the Venezuelan crisis as Bolivian President Evo Morales condemned his presence in South America and rejected U.S. military bases in the region.

“We condemn the US Secretary of Defense, James ‘Mad Dog’ Mattis’s presence in South America for his country’s interests. The most important interests are those of Latin America and the Caribbean, Zone of Peace that rejects US military bases installed to steal our natural resources,” Evo said via Twitter.

Venezuela is experiencing a deep economic crisis linked to U.S.-sponsored economic sanctions and an overall boycott of the national economy by Venezuelan economic elites.

“The U.S. position in this regards is very prudent. He considers the solution (to the Venezuelan crisis) should be led by Brazil,” Brazilian Defense Minister Joaquin Silva e Luna told the press after a meeting with Mattis and Brazilian Foreign Minister Aloysio Nunes.

During his flight into Brazil, Mattis told the press “one of the reasons I’m going down is to make sure that those that are democracies, that believe in those fundamental rights also know they have a partner military to military in the United States.”

In June, during Pence’s visit, the U.S. highlighted Brazil’s role in the U.S. offensive against Venezuela. “Brazil has led efforts to expel Venezuela from Mercosur, joined the U.S. to suspend Venezuela from the Organization of American States,” Pence said.

Mattis also discussed U.S. use of Brazil’s Alcantara missile and rocket launching base.

On Tuesday the U.S. secretary of defense will speak at the Escola Superior de Guerra, the country’s college for politics, defense, and strategy. After that, he will fly to Buenos Aires, Argentina, and later to Chile and Colombia, where he will visit defense authorities.

The four countries on Mattis’ agenda are currently reliable U.S. allies, they are all members of the so-called Lima Group and are part of the six nations that announced in April their temporary withdrawal from the Union of South American Nations (Unasur), a regional integration body without U.S. presence that proposed the expulsion of all foreign military bases from the region.

Mattis will be the first U.S. official to meet with the newly-elected Colombian President Ivan Duque’s government. Colombia recently announced they will permanently withdraw from Unasur, an institution Duque has called an “accomplice to Venezuela’s dictatorship.”