US Justifies Step in Embassy in Cuba 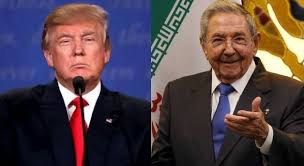 Washington, Mar 6 (Prensa Latina) The US Department of State tried to justify once again its decision to keep the number of officials in the US Embassy in Havana indefinitely low, a measure that several sources consider is politicized.

Comments published in Twitter by spokeswoman Heather Nauert appeared Tuesday in her Spanish account, the uS Department of State said that the position of the US Secretary of State Rex Tillerson is due to ‘protect the personnel of the embassy.’

Nauert said an investigation on the health incidents reported by US diplomats working in the Cuban capital, is being taken place.

This was used as a pretext to remove more than 50 percent of the US Embassy personnel in Havana, and expel 17 Cuban officials from the Cuban Embassy in Washington DC.

Last Friday, the Department of State let known the reduction of that personnel would stop being temporary, and would become official starting March 5, including a warning to US citizens to reconsider on their travels to Cuba.

All these measure are still on after months of investigations, with no evidence on the health incidents.

The State Department now maintains that Cuba should focus on helping to locate who or what is responsible for the damage to US citizens, when the representatives of the specialized agencies that have traveled to Havana have recognized the cooperation of the island in the matter.

At the same time, the agency recalled Cuba’s obligation to protect diplomats in compliance with the Convention of Vienna, despite the repeated guarantees of the Cuban government that it strictly complies with that multilateral treaty.

The comments of the US government come after the island and several American sectors criticized the decision on the measures and their political nature.

The Director General of the United States of the Cuban Foreign Ministry, Carlos Fernández de Cossío, told the press yesterday that these are positions guided by political motivations, which ‘are added to the long list of hostility that the people of Cuba know very well. ‘

According to the official, the White House acts with bad intentions and appeals to political manipulation, taking into account the lack of evidence on the alleged attacks.

A working group on Cuba, formed by representatives of the two US leading political parties, considered the Friday announcement as ‘deceitful’ and called for a return of the US officials to the embassy as soon as possible.