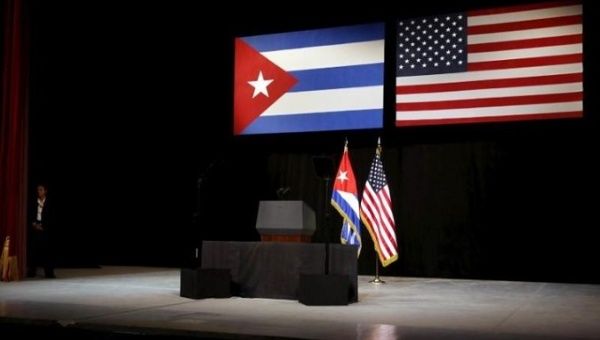 Since January, only 26 U.S. visas have been awarded to Cuban officials, while six diplomats were outright denied. | Photo: Reuters

The Cuban Foreign Ministry said these “capricious approvals and delays” are part of a “new pretext” to discourage bilateral relations.

Nov 29 (teleSUR) Cuban diplomats are being sidelined in the U.S. visa process for foreign politicians, a statement from the Ministry of Foreign Affairs of Cuba (MINREX) reported Thursday.

Since January, only 26 visas have been awarded to officials, with a further six diplomats assigned to the Cuban embassy in Washington denied visas outright. In contrast, over 100 temporary and permanent diplomatic visas have been granted to U.S. government personnel working at the U.S. embassy, with only one denied.

The United States has defended its actions, saying they are a result of the low numbers of visas distributed to U.S. officials in 2017. Cuba contested the statement, blaming the U.S. decision to cut its number of international ministry staff.

The Cuban Foreign Ministry said these “capricious approvals and delays” are “an unbalanced behavior and alien to the norms of reciprocity” and part of a “new pretext” intended to discourage bilateral relations.

Relations between the two countries have been strained since U.S. President Donald Trump’s decision to reinstate an economic, commercial and financial blockade as a relic of the Cold War in the 1960s.

Earlier this month, world ministers participating in the 26th Ibero-American Summit of Heads of State and Government demanded the blockade be dismantled. Similar calls have been made by the United Nations, the World Health Organization and the Pan American Health Organization, among others.