US Embargo on Cuba: South Africa Joins Other Nations in Condemning America 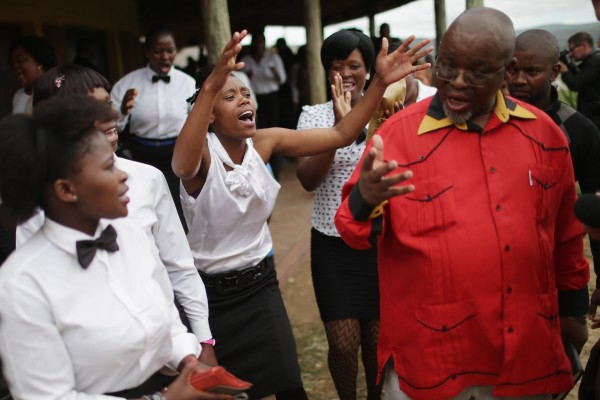 MVEZO, SOUTH AFRICA – DECEMBER 13: African National Congress General Secretary Gwede Mantashe (R) is escorted by a choir after attending a memorial service in honor of former President Nelson Mandela in his birth village, also called the Mvezo Komkhulu or ‘great place,’ December 13, 2013 in Mvezo, South Africa. Mr Mandela passed away on the evening of December 5, 2013 at his home in Houghton at the age of 95. Mandela became South Africa’s first black president in 1994 after spending 27 years in jail for his activism against apartheid in a racially-divided South Africa. (Photo : Photo by Chip Somodevilla/Getty Images)

South Africa is the latest to announce a solidarity campaign for Cuba, protesting the U.S. embargo.

“We should pay our solidarity to the cause of the Cuban people, reciprocate the solidarity they gave to us, and do that out of love and out of appreciation that we need each other,” said Secretary-General Gwede Mantashe of the country’s ruling African National Congress, according to Voice of America.

The announcement was met with some confusion — questions arose of why the country is picking up the cause on the 50-year-old embargo.

Gideon Chitanga, a political researcher at the Center for Study of Democracy, told VOA that it is because the country is maturing as a democracy and may be ready to start engaging in global issues.

“More and more, South Africa is becoming a confident voice of the global South. So, the timing should be seen in terms of a South Africa which is asserting itself in the context of general global issues, but not to necessarily to say that this approach opposes the West,” Chitanga said. “It’s a policy that is based on calling for more engagement.”

Mantashe said he intends to call on President Barack Obama to lift the blockade and release five intelligence spies — known as the Cuban Five.

“Ultimately it is the political decision by the president of the United States to release the Cuban Five. It is quite important that we don’t only focus on the Cuban Five, you also focus on the lifting of the American blockade,” he said. “It has outlived its usefulness, but they don’t take the decision to lift it.”

Cuba claims the five that were taken were not spying on the U.S. government but instead on the exiled Cubans in Miami.

The United Nations has passed a resolution each year for the past 20 to break the blockade, saying it is a violation of international law. But every U.S. president has upheld the embargo, stating it will only be lifted when Cuba becomes a democracy — even though other communist nations don’t have similar ultimatums.