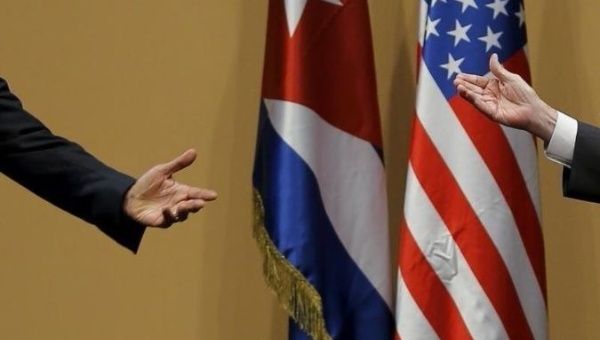 The hands of U.S. President Barack Obama and Cuban President Raul Castro are seen during a news conference as part of Obama’s three-day visit to Cuba in 2016. | Photo: Reuters

Despite heightened tensions, the talks demonstrate that the two countries have not completely halted their cooperation in certain areas.

Jan 20 (teleSur) United States officials and their Cuban counterparts have completed a round of talks on law enforcement cooperation in Washington. The main topic discussed involved how to prevent illicit drug trafficking.

Albeit coming amid heightened tensions caused by the U.S. government’s tough stance on the Caribbean island, the talks demonstrate that the two countries have not wholly halted cooperation as it pertains to drug trafficking.

It was the fourth official exchange in respect to combatting drug trafficking since Cuban and U.S. authorities established the law enforcement dialogue framework in November 2015, according to Reuters.

“The meeting took place in an ambiance of respect and professionalism,” read a statement released by the Cuban Foreign Ministry, adding that “Both parties shared the view on the usefulness of the meeting and agreed to maintain the talks in the future.”

U.S. President Donald Trump has vowed to live up to his campaign pledge to overturn rapprochement efforts initiated by his predecessor, Barack Obama, closing holes in the blockade that made it possible for investment in specific areas of the Cuban economy, including agriculture, technology, and tourism.

On Dec. 17, 2014, Obama and Cuban President Raul Castro declared the opening of a new round of dialogue between the two countries after five decades of hostility. Washington and Havana opened embassies, restored commercial flights and negotiated agreements on issues including the environment, enforcement and compliance with the law, postal service, and communications.

Those measures remain in effect, although Trump announced in June that his administration would partially reverse the opening, ordering tighter restrictions on trade and travel. The US government also cut staff at its embassy in Havana in September after mysterious health conditions affected two dozen diplomats and their families.

However, On Nov. 1, 2017, a total of 191 countries voted in favor of a resolution presented by Cuba to demand the lifting of that U.S. blockade at the U.N. General Assembly. Only two nations opposed the resolution of the overwhelming majority: the United States and Israel.