Uruguay: ‘We Will Never Support Armed Intervention’ in Venezuela

Posted on September 20, 2018 by Anthony Brenner 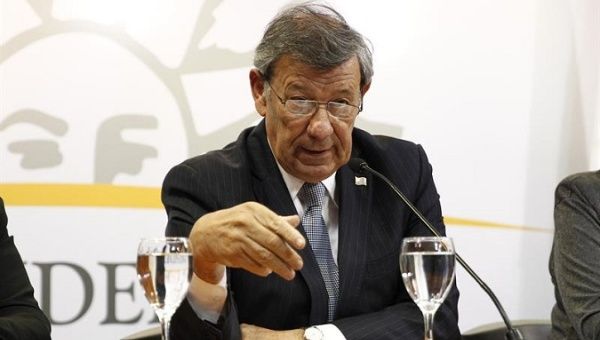 The government of Uruguay was responding to comments made by OAS chief Luis Almagro endorsing a possible military intervention in Venezuela.

Sept 19 (teleSUR) The government of Uruguay Tuesday officially condemned statements made by Luis Almagro, the country’s former Minister of Foreign Affairs and Secretary General of the Organization of American States (OAS), embracing calls for “a military intervention aimed at overthrowing the regime of Nicolas Maduro.”

The Uruguayan Foreign Ministry, which is currently headed by Rodolfo Nin Novoa, reiterated the country’s “commitment to International Law and the peaceful resolution of controversies, the strengthening of democracy, and judicial equality among states,” and stressed it “will never support an armed intervention in any country of the region as a solution to an internal crisis.”

Almagro’s hostile comments were made last week during a visit to the Colombian city of Cucuta, days after an article in The New York Times revealed clandestine contacts between United States officials and a faction within the Venezuelan military interested in organizing a coup against President Maduro.

In an attempt to counter criticism, Almagro recorded a video where he claimed he was misunderstood, but continued to urge the international community to act against the Venezuelan government comparing the economic and political situation in the South American country with the Rwanda genocide.

“Millions of people are murdered, tortured, displaced in Venezuela. The responsibility is to protect, not to count the dead,” Almagro said justifying laxity with the international principle of non-intervention.

His explanation did not stop the backlash in his home country.

Uruguay’s Communist Party requested his expulsion from the Broad Front coalition, and the country’s foreign ministry expressed its concern “for the possibility of introducing concepts or doctrines employed in other contexts that are not comparable to the situation in the region, as a pretext to legitimate an armed intervention.”