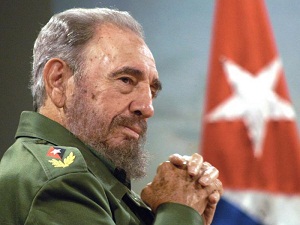 It was with deep sorrow and regret that the Cuban people learned of the passing of Comandante en Jefe Fidel Castro Ruz. Granma shares some reactions to the news. His death was met with tributes and moments of reflection by the Cuban people, who neither want, nor are ready, to say farewell, choosing instead to salute the global leader with a “Hasta siempre, Fidel.”

The fact that a man like Fidel is no longer with us is a difficult reality to bear, stated Artemisa resident and Revolutionary combatant Plácido Núñez, speaking to Granma.

Meanwhile, an emotional Maritsa Leyva who works at the Las Tunas based Nuevo Éxito food processing plant, stated, “Honestly, from the very bottom of my heart I’m telling you, so much pain can’t fit in my chest. To say Fidel, is to say Cuba, brother, the world.”

Lázaro Castro Aguilera, director of the Birán Historic Site and National Monument noted that the death of the Comandante “caused great pain. I had a tight feeling in my chest and went to visit the tomb of Lina, Fidel’s mother. I imagined talking to her, telling her that the great son she gave to the world – and for whom she suffered immensely, realizing how he suffered the vicissitudes of a revolutionary – would no longer be among us.”

He also recalled “the times that Fidel visited and talked about his life in great detail here. It was like I could see him riding up-hill on a horse, like a hunter; I could picture him washing in the river close by, and doing things that kids and adolescents do.”

Despite being deeply affected by the news of Fidel’s death, staff at the farm where the Co­man­dante en Jefe was born will continue to receive visitors that arrive to the establishment over the coming days.

”We must continue researching Fidel, in order to reveal the entirety of his greatness and wisdom, as a way of keeping him alive, to ensure that he always accompanies us,” added López.

According to the director, visitors to Birán are very respectful, and the majority express genuine pain. A book of condolences – which sits next to a photo of Fidel surrounded by flowers – has been opened for visitors to the facility to sign.

”People approach staff at the Birán Historic Site to speak about all that Fidel has done for the people, the importance of respecting his ideas. The majority believe that the best way to honor him is to remain united,” stated Lázaro Castro Aguilera, speaking to Granma.

All Cubans have been deeply affected by the news. Birán resident Pedro Pascual Rodríguez for instance stated, “I feel bad. Fidel has died! The revolutionary with the greatest ability to organize I have ever known. He was able to unite Cuban patriots and lead them to victory. Then he spent his life doing the same around the world.”

Iraida Martínez Duardo, a retired teacher from the province of Las Tunas described Fidel’s death as an irreparable loss, “Above all because even at 90 years of age he still retained the same lucidity and spirit which have always characterized him. Now it’s our duty to continue his work, the Cuban people will never forget this day. I will never forget it.”

Those who remember how Cuba was before the glorious triumph of 1959 know just how much Fidel’s leadership means, stated a visibly emotional Vicenta Calderín, a retiree who lives in the province of Artemisa. “The Comandante offered Cubans a better future, what he did for the people is unparalleled.”

”It was Fidel that led the Revolution and took important steps to eradicate illiteracy, promote health and education. Today will be remembered with sadness,” according to Manuel de Jesús Catalá Balón, Guantánamo resident and combatant of the Rebel Army’s Juan M. Ameijeiras Sixth Column.

For Antonio Marrero Duvergel, Radio Re­belde correspondent in Guantánamo, Fidel has been the greatest statesman in history; an outstanding military strategist; insurmountable politician; leader of the masses; tireless student, with a vast knowledge on matters of science, economics, sports, culture, the environment; an excellent orator… global example of internationalism with an unwavering commitment to the people, the dispossessed; qualities which have seen his work spread across the entire globe, cemented forever among revolutionaries.

Leonardo Aguilar, a 70 year old Guantánamo resident remembers Fidel as the person from whom he has learned the most in his life.

”I was a literacy teacher, and I have participated in every task required bv the Revolution. That’s how I’ve come to define myself over the years. I saw him once when he came to Guantánamo, but only from afar. I would have liked to shake his hand,” noted Aguilar.

Meanwhile, Marrero Duvergel recalled, “I was born in the countryside, and thanks to Fidel and the Revolution I became a journalist. What I am today, I owe to him.”

Joaquín González, a teacher at the Ernesto Che Guevara vocational school in Villa Clara noted, “The Revolution led by Fidel was the same one that provided brain surgery for my daughter in a famous hospital in the capital, and which today pays my wife Nilda a stipend to take care of her. I will never forget this.”

Comments such as these reflect the Cuban people’s eternal gratitude toward the Comandante. His ideas, his motivation to fight and concept of Revolution “Will carry on, in the hands of Army General Raúl Castro, who will have the support and commitment of the entire Cuban people,” stated Eberto Estrada Sao, director of the Las Tunas Provincial Meteorology Institute.

”He will be remembered as a good man, of respect, worthy of these times, an indisputable leader of this nation, of the Americas and the world. Now he will multiply in every Cuban that considers them self to be a worthy continuer of his work.”

Rigoberto Miralles, a retiree from Bayamo, noted that the Comandante’s constant lessons in struggle, tenacity, sacrifice, humanism, solidarity, patriotism “will show us the path to follow to achieve the prosperous society that we Cubans aspire to create, without renouncing the sovereignty woven with the blood of the heroes and martyrs of the homeland.”

”I had the luck of knowing him as a child, when we were students at the Número 15 Rural Mixed School, located close to his childhood home. He didn’t seem like the son of the most prominent landowner in the area, given the way he treated the other students,” commented Pascual Rodríguez, a neighbor from Birán.

Rodríguez also noted, “You immediately realized he was very intelligent, and was ready to do anything. When I think back, I realize that even at that time you could already see the humanist qualities for which he is renowned.”

According to Delia Rivero Tour, a teacher at the Volodia Kindergarten in Las Tunas, “Starting now we must keep his memory alive, remember him.

”I always think about his tenderness toward children with a phrase of his which says “a healthy child deserves everything, a sick one even more.”

These words speak volumes about the man he was,” stated the Kindergarten teacher.

Lorena Infante García, a student at the Inés Luaces Middle School in Camagüey, agrees, noting that “we love him as our most senior leader, for everything that he has done for the happiness and well-being of Cuban children and those worldwide.”

According to Infante, for pioneros (elementary school students), the Comandante has been and will continue to be an example to follow, in the same way as José Martí, Ignacio Agramonte, Antonio Maceo, Camilo Cienfuegos, Ernesto Che Guevara and so many other Cuban heroes and martyrs.”

This means being good, disciplined and committed students, ready to respond to every call made to improve the Revolution, become highly qualified professionals, and above all good people, just like him, always sincere, honest, and concerned about the fate of others, she noted.

“The Cuban youth, for whom he did so much, have lost their Comandante on the physical plane, but will continuously rediscover him by preserving his immense legacy in all aspects: ethical, moral, patriotic. Observing his conduct will be a mirror before which we look at ourselves, to be better and more committed,” stated 23 year old bank employee Lisandra Mar­tínez Acea, from Cienfuegos.

This is a moment to ratify his thought and the principles of the Revolution…His ideas and actions turned our country into an example for the rest of the world, and him into an icon, a source of inspiration, stated Yamilia Almanza a young worker at the Latin American School of Medicine.

Fidel is and will continue to be a guide, a source of inspiration, a catalyst for every revolutionary project, the man of Moncada, the Gran­ma expedition, the Sierra Maestra, the indisputable leader…the eternal Comandante.

No one should think that the death of our Comandante means and end to the Revolution, stated Armando Peña Gar­vey, an employee at Guan­tánamo’s La Primada food processing plant, “on the contrary, now we are going to become even stronger and more united. We’ve got to keep on, and show the world who we Cubans are.”

”Fidel isn’t dead at all,” said Jesús Catalá Balón, combatant from the Rebel Army’s Juan M. Ameijeiras Sixth Column.
”What died was his body, but he’s still alive, because there are millions of people here, above all youths, who are following in his footsteps. Here, and around the world,” he added.

Meanwhile, Ángel González Rodríguez, reserve forces Lieutenant Colonel based in Santa Clara noted that “As a child I saw the Freedom Caravan pass by, and at some place, before masses of cheering people, Fidel stated that he would like to see this multitude at his burial, because it would mean that he had fulfilled his promise to the people, to whom he dedicated his life. And that’s exactly how it will be.”

His death is a terrible event, but nothing is going to happen here, highlighted literacy campaign volunteer, Leonardo Aguilar. “Raúl is here, and with him the youth and entire country, to keep the flame of the Revolution alive.”