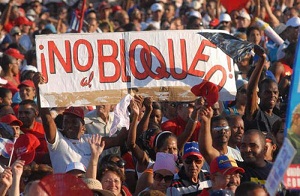 The independent expert in fostering an international democratic and equitable order, Alfred de Zayas, defended here today that Cuba received compensations for the damage the economic, trade and financial blockade imposed by the United States has caused.

‘We have had for a long time the maxim Ubi Jus Ibi Remedium. Thus, if there is a violation of the law, there should be a compensation,’ the lawyer, appointed by the UN Human Rights Council as Special Rapporteur in 2012, told the news agency Prensa Latina.

According to the expert, the blockade, in force for more than 50 years, is a violation if the international law and the United Nations Chart, and brings serious consequences to Cuba.

De Zayas said the damage caused by the blockade reached billions of dollars and the compensation should be decided some time by a court.

He also said he expected that the support from the world solidarity groups brought some progress in that direction.

The UN General Assembly will vote an initiative about the issue on October 26 this year, a process that began in 1992 at the main UN deliberative authority.

De Zayas also tackled the issues of the extraterritoriality of the sanctions imposed on Cuba.

‘I am surprised that foreign companies continue to be fined for millions of US dollars by the Treasury Department when they do business with Cuba, under the argument of violating the blockade,’ he said.