U.S. Sec. of State Kerry to Meet With Cuban Counterpart at Summit Secretary of State John Kerry will meet with his Cuban counterpart, Bruno Rodriguez, at the Summit of the Americas, the U.S. State Department announced Tuesday.

The meeting, which will likely take place on Thursday, would be the highest-level official meeting between the U.S. and Cuba in more than half a century.

The meeting between Kerry and Rodriguez will likely take place before an “encounter” between President Obama and Cuba’s President Raul Castro, which may occur Friday or Saturday at the summit.

Though an official meeting between the two countries’ presidents has not been scheduled, it could still be possible. 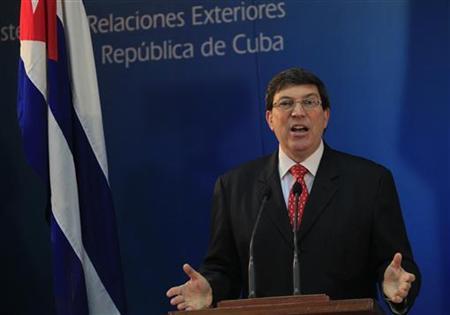 This is the first summit that Cuba will be able to attend. Until this year, the U.S. blocked Cuba from taking part in these meetings.

There are still issues being worked out between the two countries regarding the opening of the embassies in Havana and Washington, which officials had hoped would happen before the weekend summit.

When the embassy does reopen in Havana, Secretary Kerry is expected to go and officiate — another first.