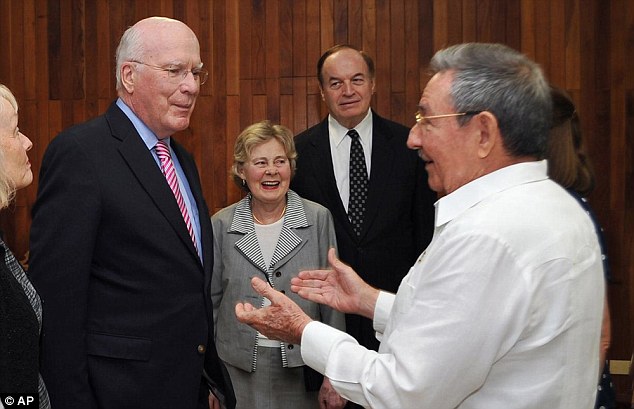 Cuba’s President Raul Castro, right, speaks with U.S. Sen. Patrick Leahy, left, a Democrat from Vermont in 2012. The pair could meet again for talks on Monday over trade reforms.

Led by Democratic Senator Patrick Leahy, the delegation met with Carlos Fernandez de Cossio, the ministry’s new director for U.S. affairs, and other officials as part of a “fact-finding trip” about Washington’s foreign policy changes toward the island country.

“A pleasure to welcome U.S. Senator Patrick Leahy and the congressional delegation to the foreign ministry. Enjoyed a constructive and candid dialogue,” Fernandez posted on his Twitter account.

The bicameral delegation will also meet with government officials and Cuban business leaders.

The recent unexplained physical afflictions suffered by U.S. embassy personnel in Cuba, including hearing impairment, are on the agenda. The incidents led Washington to announce it was scaling back its embassy personnel and suspending granting visas.

According to Cuba’s foreign ministry, Fernandez stressed to lawmakers that neither U.S. nor Cuban investigators have found any evidence that such attacks have taken place.

The U.S. hasn’t formally accused Cuba of carrying out the attacks, but President Donald Trump said in October he believed Havana was responsible for them. Cuba has denied any responsibility.

The U.S. State Department issued a travel warning last year telling Americans not to visit the country, despite the fact that no tourists have reported any health problems.

Leahy’s office said that issues to be discussed on the agenda include bilateral cooperation in maritime security, search-and-rescue, narcotics, human trafficking and immigration.

Leahy’s office said the Democratic senator has been involved in efforts to replace “the failed 50-year-old U.S.-Cuba policy of isolation with a new path toward normalization.”

The Congressional delegation will hold a press conference on Wednesday morning before returning to Washington.