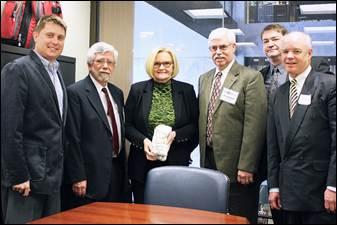 Missouri officials and businesses have been moving quickly to enter the Cuban market ever since President Barack Obama’s announcement in December of plans to drop the more than 50-year-old trade embargo.

Already, a group of Missouri rice producers has secured permission from the U.S. Department of Commerce to ship one intermodal cargo container of Missouri-grown rice to Cuba as a sample and it is awaiting permission for a second container to be shipped to Cuba’s new deep-water Mariel Port facility.

Cuba has the potential to be a lucrative market for U.S. grown rice, and Missouri rice producers want to be the first in line for the market and its 11 million consumers.

“The average Cuban eats 110 pounds of rice a year,” Greg Yielding of the U.S. Rice Producers Association told a gathering of Missouri rice producers last week in Dexter, Mo. “They eat it for breakfast, lunch and dinner.”

“It is my understanding that we have in fact removed some of the barriers for just a couple of containers of rice to go down” to Cuba, McCaskill told St. Louis Public Radio Tuesday.

The group is also working with officials at the Cuban Interests Section in Washington to secure an import license to ship the rice into Cuba.  “So we’re trying to work with the Commerce Department to get them the documentation they need to do that,” McCaskill said.

McCaskill has been in regular contact with the rice producers. She met with them in Washington before her trip there last week and has conducted conference calls with the group this week.

During her trip to Cuba, McCaskill spoke with officials there about Missouri rice.  She also spoke with businessmen during her visit to the Mariel Port.

“If you saw the size of this facility and the capacity of this facility, you would realize that they really need business. It’s only going to work if it becomes an important shipping hub in the Caribbean, so they’re anxious to encourage business at this port,” McCaskill said.

She quickly added that while workers at the port see business with the U.S. as desirable, Cuban government officials are being careful “not to get out in front of (President) Raul Castro.”

Besides inquiries on behalf of the state’s rice producers, McCaskill said she also talked with Cuban officials about other products, including poultry, Missouri could ship there. “By and large, they’re importing just dark meat and so Missouri poultry (growers) wanted to make sure I let them know how delicious white meat is,” she said.

Next week, Gov. Jay Nixon will be the first governor to visit Cuba since the president’s announcement.  He’ll be heading a delegation of state officials and businesspeople to Cuba. Yielding, Martin and others will be joining him on the trip as will individuals representing other agricultural and manufactured products.

Last month, U.S. and Cuban negotiators met in Havana for the first round of talks on normalizing relations.  This Friday, a second round of talks is set to take place in Washington. Each side has assembled a list of items to be discussed before they agree to open embassies in each other’s country.

McCaskill says she’s encouraged about the negotiations for two reasons. First, “there didn’t appear to be deal-breakers on either side. Both sides’ lists are relatively small and I don’t think very unreasonable,” McCaskill added. Second,  “the fact that two women are negotiating is an added bonus because I think they will be anxious to get it done and maybe not quite as interested in posturing as some of the men might be.”