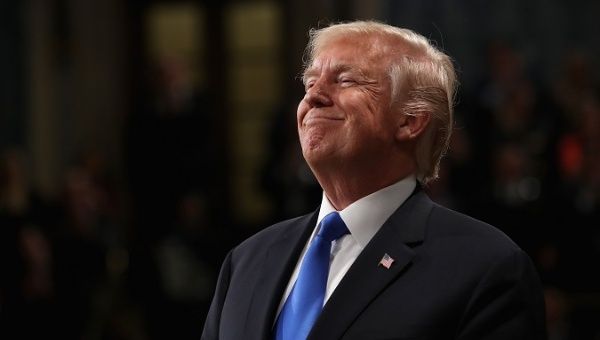 Critics of the U.S. policy say mounting sanctions are the main reason behind the economic hardships in both countries.

Jan 31 (teleSUR) In his first State of the Union address to U.S. Congress, President Donald Trump took aim at the governments of Cuba and Venezuela calling them “dictatorships” as he ramps up his country’s long standing interventionist and regime-change policy towards left-wing governments in Latin America.

“My government has imposed harsh sanctions on the communist and socialist dictatorships of Cuba and Venezuela,” Trump told lawmakers at Congress Tuesday night as part of the foreign policy section of his address.

The president did not make any mention of other Latin American countries and focused on the two countries that he sees as his administration’s main antagonists in the region over what he calls “human rights violations.”

According to the U.S. State Department, the United States has applied “more than 50 economic sanctions” on Venezuelan individuals and the country’s financial system since Trump came to power a year ago.

The socialist government of President Nicolas Maduro and critics of the U.S. policy say that such sanctions are damaging the Venezuelan economy and contributing to the depletion of food and medical supplies as they prohibit U.S. companies from doing business with Venezuelan-state institutions.

The Trump administration has also said it won’t recognize the upcoming presidential elections in Venezuela scheduled for the end of April despite ongoing dialogue between the Venezuelan government and several factions of the right-wing opposition in the Dominican Republic.

Meanwhile, since coming to office Trump has been reversing the diplomatic breakthrough that his predecessor Barack Obama initiated with Cuba by restricting travel and trade with the Carribean island.

In 2014 and after decades of hostility, Obama and Cuban President Raul Castro agreed to open embassies, restore commercial flights and negotiate agreements on issues including the environment, enforcement and compliance with the law, postal service and communications.

However last june the Trump administration downgraded the diplomatic presence in Havana and expelled Cuban diplomats from Washington over alleged “sonic attacks” against the U.S. embassy in Havana last year, which were later dismissed by the Federal Bureau of Investigation.