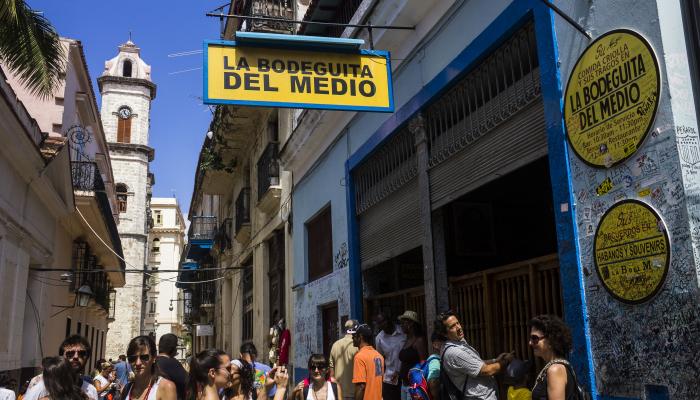 Where else would you have a drink but in Havana? This question has now, luckily, more answers than ever. Many – tourists particularly- prefer to visit traditional bars, some of them are world famous, such as La Bodeguita del Medio, El Floridita and Sloppy Joe’s; while others try ”the new thing” and they approach to private bars, attended specially by Cubans, where prices, although high, are lower.

PanamericanWorld proposes today an imaginary journey through the best five bars in Havana, that are attractive not only for their history, but also for the singularity of their offers.

For a long time, neon lights were absent in Havana’s restaurants and bars. When the night came, the city was left in the dark, with an obsolete electric lighting that gave even more shadows; but this scenario has been gradually changing.

The economic reforms supported by the Government included an important space for private businesses, and, after a short time, the face of the city has been ‘brightened’ by ads and boards of worse or better taste. New private bars and restaurants have opened their doors in different corners of the city and this has therefore increased diversity and competition, although prices from both worlds – state and private- remain unaffordable for most Cubans.

This emblematic bar was founded in 1917 and it achieved great renown during the 30s and the 50s. Great figures such as Gary Cooper, John Wayne, Babe Ruth and Ernest Heminway would go there to taste its many drinks, among them, vodka with cocoa cream.

The Sloppy Joe’s is in an enviable location: Zulueta street, between Ánimas and Virtudes, in the heart of Old Havana’s Central Park. Oblivion fell on this place for a long time, but a millionaire investment from the Office of the City’s Historian brought this emblematic bar back to life.

In the reconstruction, crockery, tableware and napkins were kept the same, but above all, the restaurant’s menu was preserved, since it once gave fame to the place due to its more than 30 cocktails. One of its most eye-catching elements, is its impressive 18 metre long mahogany bar, made of one tree only.

This peculiar place opened its doors in 1942. The explanation for its strange name (The Cellar in the Middle) is that it was in the middle of Empedrado street, near to the Plaza de la Catedral. Journalist Lenadro García once came with the idea of signing one of the Bodeguita’s walls, then others imitated him and it became a tradition held even in current days, where its walls are full of signatures of the famous and the unknown.

Pablo Neruda, Agustín Lara, Brigitte Bardot, Ignacio Villa (known as snow-ball) and Ernest Heminway are most visible names written on those walls. The American author wrote ”My mojito in La Bodeguita, my daiquiri in El Floridita”. It is precisely the ”mojito” – made with rum, sugar, mint and sparkly water- the drink that identifies the Bodeguita, which is a brand in countries like Colombia, Mexico, Spain, Argentina, Bolivia, Germany and the United Kingdom.

In the park of 17 and 6, in El Vedado, it’s the sculpture made by artist José Villa Soberón, which depicts John Lennon sitting on a bench. Not far from there, in the basement of a building, one of the most suggestive state places was built, targeted to those who enjoy the mixture of drinks and good music: El Submarino Amarillo.

The bar owes its name to one of the most iconic songs of The Beatles, and it was fully conceived as a tribute for the famous quartet from Liverpool. There are printed texts of Lennon and McCartney on the walls, and at the end of the bar, the covers of their albums can be seen, while there are, all over the place, hatches, keels, and tubular shapes that imitate a submarine.

The entrance is free and recorded music can be heard. At night, many bands give concerts, for a price of two Cuban Convertible Pesos (CUC). The intimacy of the place, the quality of its music, the drinks and the not so high prices have made of the Submarino Amarillo one of the best places to spend a night in Havana.

In El Vedado, in 11 street, number 61, corner 26, in an old oil factory, a very interesting project opened its doors: La Fábrica de Arte, led by musician X Alfonso. There it is also possible to combine the most exquisite drinks with a wide variety of artistic manifestations.

The place has a deck for concerts, an area for dancing, theatre and cinema and a hall to expose digital Art. In little time, La Fábrica has captivated the attention of the Cuban youth, for its attractive musical scene, the magnitude of the place (with capacity for 1200 people) and also due to its way of ticking the ration card – a booklet where subsidized supplies are controlled monthly- that since the 60s has been one of the most venerated and criticised symbols of the Cuban Revolution.

Among the private bars opened since the execution of the economic reforms, one of the most central and gaudy ones is Waoo! It is located in one of the most attended places of the Cuban capital: the corner L and 25, in El Vedado.

One of the specialities of this ”Snack – Bar & Restaurant” is the ”mojito Waoo!”, prepared with honey, lemon, mint, angostura, Havana Club Rum (3 years) and Havana Club Rum Reserve. Prices here are a bit higher than in other places, but its great location has led it to be one of the favourite bars in the city, specially for tourists.