There Is No Good Imperialism: Venezuela Rejects Interventionism at OAS Session 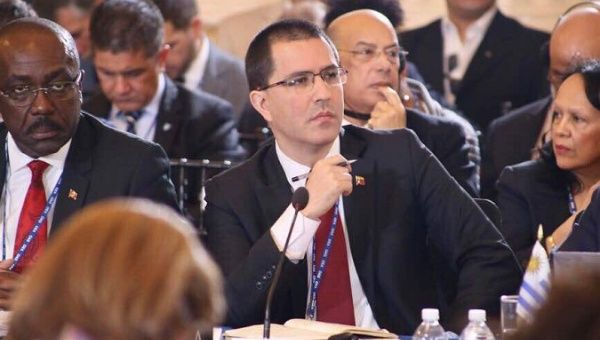 “There is no good imperialism. Even though they want to impose the Monroe Doctrine on us, we will triumph with our Bolivarianism,” said Arreaza.

June 4 (teleSUR) The Venezuelan Foreign Minister Jorge Arreaza rejected the Organization of American States’ intention to discuss “the situation in Venezuela” during its general assembly’s session taking part in Washington on Monday and Tuesday.

Arreaza claimed the discussion point was not approved according to the corresponding legal procedures, because Venezuela as a member state rejected its inclusion in the agenda.

“We have not questioned the whole agenda, but just the point about the situation in Venezuela. It’s not true that Venezuela doesn’t want an agenda, like some have said in the last days,” he said, “but we consider we must do things with the correct procedures.”

He denounced the intention of some countries to take decisions and discuss issues relating to the Bolivarian government without taking into account Venezuela’s will. “We consider that the most basic agreements on the functioning and procedures must be respected and that that point about Venezuela shouldn’t have been included,” he said.

The U.S. embassador at the OAS, Carlos Trujillo, said that 24 of the 35 member countries back up the agenda’s point 24, regarding Venezuela’s “humanitarian situation,” the past electoral process and a possible suspension from the U.S.led body.

During his participation in the session, Arreaza reminded the present diplomats that Venezuela will remain a member of the organization until April 2019 and until then they will continue fulfulling their obligations. “We will defend Venezuela in any forum and moment, just as the president of Venezuela has said.”

In April 2017, the diplomatic mission of the Bolivarian Republic of Venezuela at the OAS handed in a letter signed by President Nicolas Maduro formalizing their decision to leave the organization.