The value of a unique piece 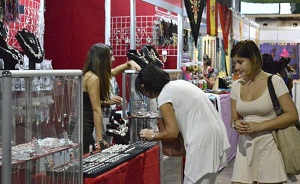 Crafts, as we know them, are an elemental and meaningful human art form, which have transcended from the merely manual to a more complex and artistic plane.

Utilitarian objects, for daily and domestic use, have been subject to increasing stylization. As such, the majority of objects for sale at FIART 2016 are more elaborate pieces.

This creative process, with the manual dexterity required for elaboration, and the real attention to detail, can hardly be produced on an industrial scale. This is probably the main attraction of these handicrafts, with their own intrinsic meaning, offering the privilege of obtaining a one-of-a-kind piece.

Besides being an excellent opportunity to appreciate perhaps the most representative of these crafts, FIART has become a space for the promotion and commercialization of these works.

At the Pabexpo fairgrounds in western Havana and under the motto “Art, Utility and Functionality”, visitors discovered different types of pieces, this year spread across almost 500 stands, including some 250 Cuban artisans, and 80 foreign guest exhibitors from 18 countries (for the first time from Portugal and Haiti, as well as the already familiar Argentina, China, Korea, Colombia, Costa Rica, Guatemala, Indonesia, Mexico, Panama, Ecuador, Italy, Canada, Venezuela, Spain , India and Peru), together with those classified as institutional — including the FCBC, Galería Génesis, Coral Negro — all located in Exposition Hall D.

Mercy Correa, FCBC director of crafts, told this publication that increasingly quality pieces are demanded, which perhaps explains a decline in the number of national and foreign exhibitors, “and this will continue because it is a question of hosting a Fair that is an expression of the very best of our crafts and those of other countries.”

The variety of proposals, however, allowed us to observe the different techniques used to shape and work common materials such as wood, clay, metals, leather, stone, paper, plant fibers, and textiles.

FIART 2016 (December 6-18) focused on textiles as an art form, with 50 stands in Pabexpo’s Exposition Hall B. The province of Cienfuegos (located in the central south region of the island about 250 kilometers from Havana) stood out among exhibitors, as a region that is renowned for this craft.

The historic center of Cienfuegos was declared a UNESCO World Heritage Site in 2005. As such, the general design of this year’s Fair centered on the architectural traditions of this city recreating, for example, the bandstand of its central park and its singular Arch of Triumph.

The extended Exposition Hall C was again a space for furniture, this time with a smaller sample to make room for ceramics and jewelry, while Hall A was mainly dedicated to footwear.

FIART continues to be an essential space for the development of Cuban crafts and their encounter with international styles and, as its organizers have commented, increasing care is taken to present the true essences of this art form, in order to rightfully call it popular art.