‘The Union Of Our Revolutions Paid off’: Venezuela’s Maduro Congrats Cuba on Anniversary of Cuban Revolution 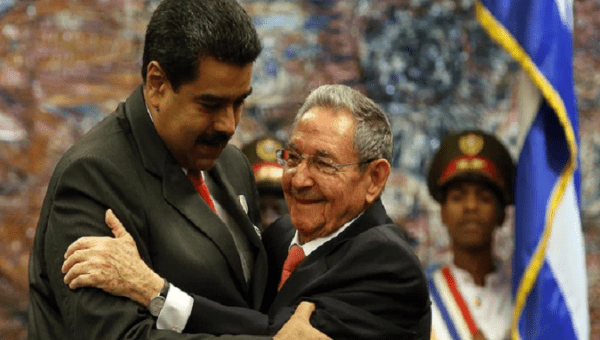 Maduro praised the heroism of the Cuban people in their resistance against six decades of U.S. imperialist aggression.

Jan 1 (teleSur) Venezuelan President Nicolas Maduro sent a message of congratulations to his counterpart, Cuban President Raul Castro, on the 59th anniversary of the Cuban Revolution.

In a statement released by the Venezuelan Foreign Ministry Monday, Maduro praised the heroism of the Cuban people in their resistance against six decades of U.S. imperialist aggression.

He commended the country’s revolutionary process for withstanding numerous acts of sabotage, including the economic, commercial and financial blockade imposed by Washington for the past few decades.

Maduro heralded Cuba as an example of dignity and hope for the working class the world over, especially in the areas of health, education, child protection and other indicators of human development.

“… (On) January 1, 1959, (the Revolution put), an end to the brutal tyranny of Batista, ending the cycle of oligarchic, colonial and imperialist domination,” said Maduro.

Maduro stressed the vital relationship between both the Cuban and Bolivarian revolutions, as well as the similar emancipatory legacies of Jose Marti in Cuba and Simón Bolivar in Venezuela.

“The union of our revolutions paid off in the construction of Alba, Petrocaribe and Celac (that have) been the vanguard in the struggle for a multipolar world, and which will continue to deepen (the strength) of … economic, political, social projects to bring well-being to the peoples of the Great Homeland and the world,” pressed Maduro.

On January 1, 1959, Rebel Army forces headed by Fidel Castro entered the city of Santiago de Cuba victorious, marking the triumph of the Cuban Revolution, which toppled the U.S.-backed dictator Fulgencio Batista, who had assumed power after orchestrating a coup in 1952.

Nicaragua, Bolivia, El Salvador, the DPRK, Iran have also sent messages of congratulations to Cuba on the occasion.