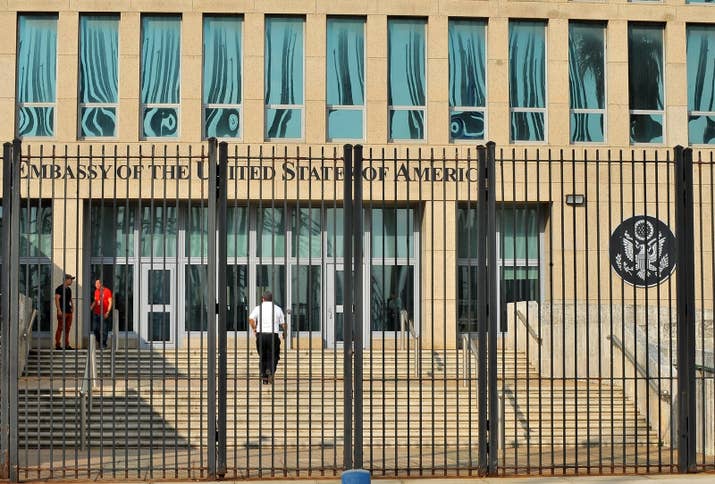 View of the US Embassy in Havana. Yamil Lage / AFP / Getty Images

“I feel a sonic weapon is very unlikely,” said one expert. “They don’t work very well.”

News reports have blamed US diplomats based in Cuba losing their hearing in the last year on a “health attack” blamed on a mysterious, silent “sonic weapon.”

“I can’t think of any way that the illness and hearing loss are related to sound,” psychologist Andrew Oxenham of the University of Minnesota’s Auditory Perception and Cognition Laboratory told BuzzFeed News. “There is no way for an acoustic device to cause hearing damage using inaudible sounds.”

Nevertheless, at least one Canadian and 16 US diplomats were reported ill from last fall to April of this year. The illnesses triggered the expulsion of two Cuban diplomats in May, and follow other past reported incidents of harassment of US diplomats, such as break-ins, bugging, and videotaping.

“We hold the Cuban authorities responsible for finding out who is carrying out these health attacks on not just our diplomats but, as you’ve seen now, there are other cases with other diplomats involved,” Secretary of State Rex Tillerson told reporters.

The State Department has never endorsed any of the various theories about what happened to its diplomats in Cuba. “We just don’t have the definitive answers yet,” State Department spokeswoman Heather Nauert said earlier this month. “This is an active investigation, and that investigation is ongoing at this time.”

A State Department official said on Tuesday that there is “no known cause or source.”

Cuba’s Ministry of Foreign Affairs denied any responsibility for the illness among the diplomats in early August, and has cooperated in an investigation of the outbreak. Canadian officials are not assuming Cuba is responsible for the injuries, Reuters reported last week.

Medical records show that some diplomats suffer from “mild traumatic brain injury,” according to a CBS News report, as well as nausea and hearing loss. The University of Miami Medical Center confirmed its doctors had been consulted about the cases, but cited privacy concerns to BuzzFeed News in refusing to release any patient information.

But scientists find the notion of a silent sonic weapon hard to explain. Hearing depends on sensitive hairs in the inner ear that translate sound waves into signals our brains hear as noise, and hearing loss is triggered by damage to those hairs. Loud noises can kill and damage these hairs, but news reports claimed the “sonic weapon” was silent.

Ultrasound, which is too high-pitched for us to hear, “can’t stimulate the inner ear in a way that would cause damage,” Oxenham said. “The only way that could happen is via distortion, which would then make the sound clearly audible,” as well as “very loud.”

For infrasound, which is too low to hear, the same is also true. Damaging intensities would clearly vibrate your body. Even then, it would be unlikely to produce hearing loss, Oxenham said. “Also, the size of loudspeakers needed to generate infrasound like that would be hard to hide.”

While most news reports have described the onset of symptoms in the afflicted diplomats as silent, some have reported “deafening sound” or “buzzing” noises preceding attacks. But even an audible sonic weapon seems hard to explain, Sharon Weinberger, author of The Imagineers of War: The Untold Story of DARPA, the Pentagon Agency That Changed the World told BuzzFeed News. “You don’t know what you don’t know, but I feel a sonic weapon is very unlikely,” said Weinberger, executive editor for news at Foreign Policy magazine. “They don’t work very well.”

Cold War–era US and Soviet attempts to make sonic weapons, noisy ones, foundered on the devices working unreliably, she said, hurting some people but not others. “For a nonlethal weapon to be effective, it has to work on everyone, like a Taser. Everyone who gets tasered is tasered.”

Moreover, the point of harassment is that people know they are being harassed, meaning a secret, silent weapon doesn’t make any sense, Weinberger said.

“Imagine the Cuban government wanting to harass diplomats brainstorming meeting, ‘Well, we can kill their cat, break into their car, or yeah guys, I got this secret sonic weapon that might work unreliably sometimes to try out for the first time on a bunch of Americans. And a Canadian.’ Just thinking about it makes it sound unlikely.”

One slightly better possibility is a side effect of Cuban surveillance technology has injured the diplomats, Weinberger said. In the 1960s, the Soviet Union microwaved US diplomats in Moscow at low levels, triggering an episode of Cold War buffoonery in the form of a secret health study to see if “microwave mind control weapons” were at work on the unknowing US diplomats.

The study was headed by a scientist fired years later for “general dishonesty,” according to Weinberger’s book. And it was reliant on blood samples taken by a State Department doctor later convicted of impregnating dozens of his patients without their knowledge of him being their sperm donor at a Virginia fertility clinic.

The secrecy that accompanied the Moscow microwave investigation then mirrors the lack of information about the Cuban embassy outbreak now, she added, making the situation needlessly murky.

“It turns out the Russians were just using the microwaves to turn bugging devices on and off,” Weinberger said. The mysterious microwaves, finals records showed, were too low-intensity to hurt anyone.

So, what did happen in Havana?

“Until we know more, the possibility of mass hysteria is certainly in play,” New Zealand sociologist Robert Bartholomew, author of Outbreak! The Encyclopedia of Extraordinary Social Behavior, told BuzzFeed News. Many documented mass hysteria cases involve so-called sick buildings that turn out to be psychological outbreaks, he noted.

“Based on the scant information that has been disclosed, it is very possible that this cluster is psychogenic in nature, as most of the symptoms are headaches and dizziness, while the most serious case is described as ‘mild traumatic brain injury’, whatever the hell that means, and could be entirely unrelated.”

Mass hysteria, or mass psychogenic illness, “is the diagnosis of last resort,” social psychologist James Pennebaker of the University of Texas at Austin told BuzzFeed News, made when toxins in an environment can’t be detected amid an outbreak of illness symptoms.

While he had no opinion on the Cuban case, Pennebaker noted these outbreaks have common characteristics: they take place in high-stress environments where people frequently communicate nonverbally, and they trigger symptoms that are cultural signals for illness, nausea, headache, and dizziness among Westerners; eye-rolling in parts of Malaysia; and spontaneous dancing in the Middle Ages. (It’s worth noting that people in these outbreaks feel real symptoms and do suffer, with psychological stress manifesting as real physical ailments.)

The outbreaks also spread along friendship lines, usually among more women than men, rather than by proximity to the first person to fall ill. That first person typically has visible signs of illness, vomiting, or passing out, he added, “something you’d see after the flu, for example,” that kicks off the outbreak.

Some tropical illnesses, the Zika virus now spreading across the Caribbean after its 2015 outbreak, for example, do cause neurological disorders. The Zika virus can cause the paralytic Guillain-Barré syndrome in adults.

All of that raises the possibility of an initial illness kicking off an outbreak of psychogenic cases in the high-stress environment of the US embassy as the US resumed formal diplomatic relations with the island nation last year, a move then resisted by the new Trump administration.

The Cold War history of harassment by Cuban agents is now part of American military folklore. “This could have given rise to the expectation that similar shenanigans are happening again now that the U.S. has re-opened diplomatic relations,” Bartholomew said, by email.

“It is also worth noting that the symptoms were not officially noticed as a cluster until February 2017, after the Trump administration took office — an administration that is prone to creating conspiracy theories with little supporting evidence. It all sounds fishy to me.”