The path to proclamation for Cuba’s new Constitution 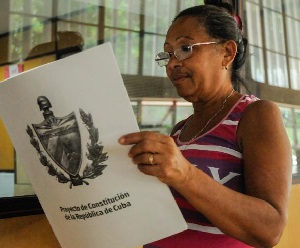 August 27 (Cubadebate) The popular consultation has begun, and streets, workplaces, schools, and even houses have become places to debate, legislate, and take charge of the times to come.

Still several months away is the proclamation of the country’s new Constitution, one of the world’s most modern, as specialists in the field have said, given the additions proposed by the commission charged with writing the first draft, which was subsequently approved by the National Assembly of People’s Power.

Nonetheless, already taking shape among Cubans is the document that will provide the country a useful economic, political, and social order, and protect citizens’ rights: the new Cuban Constitution.

But what is the route to proclamation of this new Constitution?

Granma summarizes the steps to be taken…

1. Popular consultation meetings are held, in which citizens express their opinions and suggest changes to the proposed draft:

– The Cuban people will meet in workplaces, schools, and communities – and may participate in more than one meeting.

2. Processing of proposals is conducted by the Center for Socio-political Studies and Opinion:- The proposed Constitution consists of a preamble and 224 articles, divided into 11 titles, 24 chapters and 16 sections.- To assist in the analysis and processing of opinions, each paragraph has been numbered, a total of 755.- Two-person teams leading meetings will be responsible for the minutes. All proposals made by the population will be taken into account. No votes will be conducted; all are to be recorded in the minutes.- The proposals may be:- Modification: A suggestion to add, replace, or delete a phrase or word in a paragraph.- Addition: A proposal to add a new paragraph because the the idea is not stated in the draft.- Elimination: A proposal to eliminate a paragraph because the citizen considers it unnecessary or does not agree with the content.- Clarification: A request for clarification when the citizen believes an idea expressed in a paragraph is not clear or understandable.3. Submission of proposals to the Commission in charge of preparing the draft Constitution:- Within 48 hours of each meeting, those who took minutes must deliver them to the municipal team, which organizes the information in the form of proposals. The provincial team meets and forwards proposals to the national team.- Proposals will be organized by paragraph, clearly and precisely- Finally, a Proposal Report will be prepared, which will be submitted to the Constitutional Reform Commission, for the evaluation of proposals and the re-writing of the document as deemed necessary4. The document returns to the National Assembly:

– The amended text is returned to the National Assembly for a final discussion and is submitted to a vote for approval.

5. A referendum is called

– The Council of State, in accordance with the National Assembly decision, orders the publication of a convocation for a referendum in the Official Gazette of the Republic of Cuba, and appoints members of the National Electoral Commission

– The text is submitted for approval in a referendum via a direct, secret ballot vote by citizens.

– Upon receiving the people’s backing, the Constitution is proclaimed and as of that moment becomes the law of the land in Cuba.