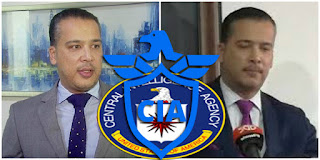 Just as we previously announced, in July 2017 the U.S. CIA recruited the then-Second Secretary of the Venezuelan Embassy in Panama, Gabriel Hernán Pérez, to join their dirty war against Bolivarian Venezuela. His subsequent treacherous steps link him to a conspiracy orchestrated by the CIA along with elements of the Panamanian Ministry of Foreign Affairs, the Miami-based counterrevolutionary splinter group Politically Persecuted Venezuelans in Exile (VEPPEX, its Spanish acronym,) the Panamanian Chapter of the so-called Venezuelan Supreme Court of Justice in Exile (TSJE, its Spanish acronym), and other members of the Latin American right.

Their actions are aimed at keeping Venezuelans living in Panama from participating in the upcoming April 22 Venezuelan elections, or even boycotting them, by lying about the electoral register of the Venezuelan Embassy in Panama. By manipulating mechanisms and international laws, with the help of the TSJE, they seek to convince regional and international organizations, as well as right wing governments in Latin America, to “bring immediate attention” on Venezuela when supplies of food and medicines are low, under the mantle of a “humanitarian intervention” as a first phase in legitimizing military action against Venezuela under the leadership of the United States and the Organization of American States (OAS).

According to credible sources within VEPPEX, Gabriel Hernán Pérez has conspired with Venezuelan ex-ministers Gustavo Sosa Izaguirre, Manuel Antonio Espinoza Melet and José Sabino Zamora, all members of the TSJE. This treachery, in addition to receiving direct support from the CIA, is also assisted by the Puerto Rican-born advisor of the Panamanian Ministry of Foreign Relations Gina Latoni, who acts as an informant to the U.S. Intelligence Services.

The same sources pointed out that Gabriel Hernán Pérez is an active participant in meetings with the above-mentioned Sosa Izaguirre, Espinosa Melet and Zamora of the TSJE Panama Chapter dedicated to brazenly carry out a virtual fraud by presenting it as coming from a Court of Justice. They issue supposed denouncements about Human Rights, they dictate resolutions and sentences, disseminate and give legality to rumors and manipulations as part of the anti-Bolivarian media war. These activities rely on the structure of the TSJE in Latin America and the U.S.A. – 6 “justices” in Chile, 8 in Colombia, 3 in Panama and 12 in the United States, facilitating the conspiracy headed by Sosa Izaguirre who has become a frequent traveler to the United States and, in particular, to Miami, where he receives his instructions on how to proceed.

It is evident that Gabriel Hernán Pérez’s actions are consistent with operations designed by the CIA station in Panama, under the guidance of the Panamanian Foreign Affairs Office. Those implicated cannot deny these accusations.