The Above-Board Way to Travel to Cuba

Posted on May 10, 2015 by Anthony Brenner
Cuba is still off-limits for American tourists, but many special-interest trips are OK with Uncle Sam. Here’s one with a musical twist 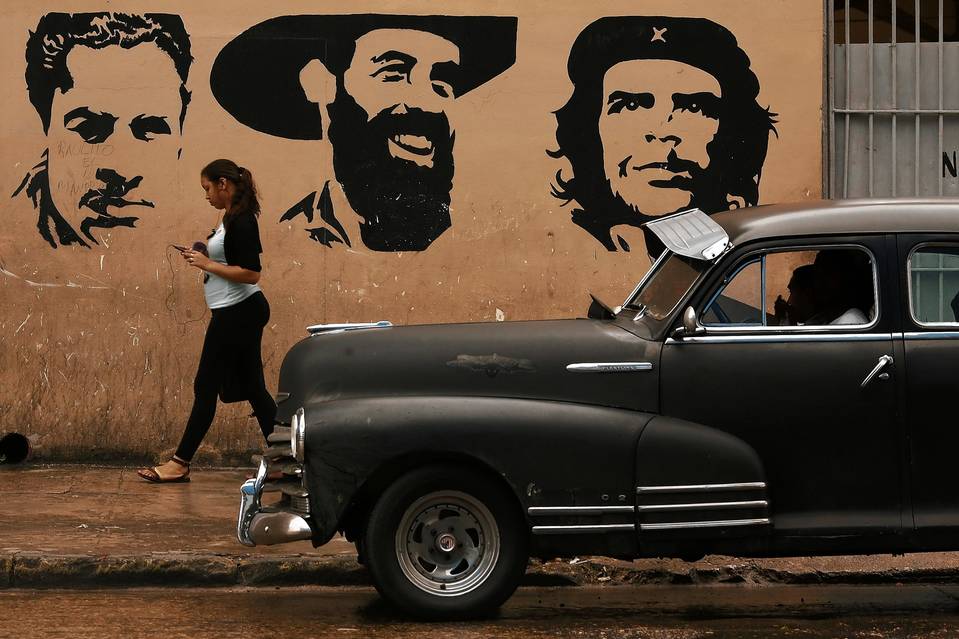 CUBA HAS BEEN calling to me ever since I first heard Desi Arnaz wail “baba-luuuu” on “I Love Lucy.” But I was always put off by the hurdles Americans had to leap over to travel there legally. Yes, many sneaked into Cuba via a third country, but they faced fines of up to $55,000 for “trading with the enemy.”

So I was thrilled when President Obama announced in December that America and Cuba were talking. Or talking about talking. That meant I no longer needed written permission from the Office of Foreign Asset Control to go there. An OFAC spokeswoman told me I could now “self-certify”—decide for myself if my trip fell into one of 12 categories of approved travel, including religious and educational activities. Tourism, she made clear, is still prohibido, so I couldn’t fly down just to bake on the beach, marinating in mojitos. To conform to the new, slightly relaxed rules, I needed to be on a “full-time schedule of educational exchange activities.” That meant joining (or forming) a group to engage in “people-to-people” encounters.

I’d recently met David Gage, a guy in my New York neighborhood who fixes stringed instruments for some of the biggest classical and jazz musicians in the city. It turned out that Mr. Gage and his wife, Judy, were part of an organization called Horns to Havana, which grew out of a 2010 trip that Wynton Marsalis and his Jazz at Lincoln Center Orchestra made to Cuba, to perform and teach. The Americans saw that the spirit of Afro-Cuban jazz pioneers like Mario Bauzá and Mongo Santamaría lived on in Cuba’s conservatory students; they also observed that the kids’ instruments were as decrepit as the Cold War grudges that kept our country and Cuba apart. Back at home, the bebop diplomats started sending instruments to the schools and putting together a team of repair masters. 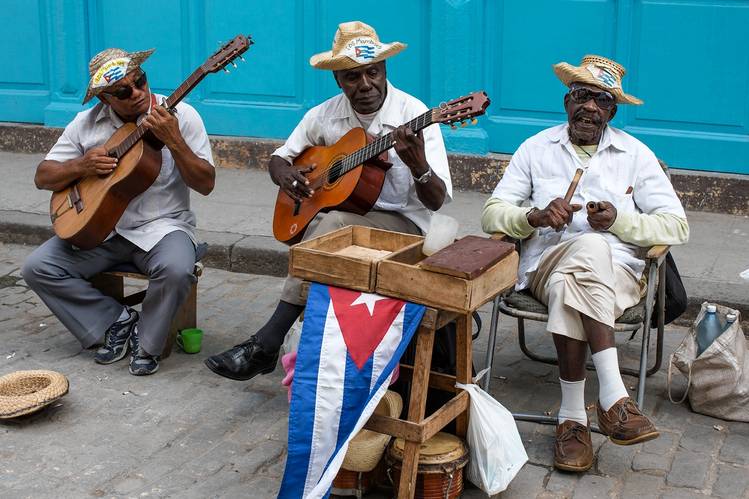 “I’ve been to Cuba seven or eight times now,” Mr. Gage told me. “It’s like an attic that hasn’t been opened for half a century.” I told Mr. Gage that I had a barely-used sax case and an acoustic guitar, and that I’d be happy to deliver them.

Within two weeks, I was ambling down Havana’s Malecón, the sea-sprayed esplanade where, at sunset, fishermen and lovers ply their lines. Based on the offers I received to buy cigars, capitalists (and their money) were warmly welcomed in Havana.

I was knocked out by the weathered architecture—Spanish Colonial, Baroque, Neoclassical, Art Deco, Art Nouveau, Modernist, Brutalist. Every boulevard was a rainbow of Packards, Cadillacs, Studebakers and Edsels. One morning, I saw a line of the fin-tailed beauties outside the Hotel Capri, a classic 1957 resort that reopened in 2014. I was at the hotel to meet Susan Sillins, who helped launch Horns to Havana, in 2011.

Ms. Sillins said that the nonprofit has supplied about 300 instruments to students and donated about $100,000 worth of reeds, strings and equipment to repair several thousand other instruments.

Darianna Videaux, a 24-year-old bassist, joined us for café con leche. “Most students here use instruments that are made in China and lent by the Cuban government,” Ms. Videaux said. “They’re free, but they don’t last too long, especially in tropical weather.”

Ms. Videaux, whose double bass was provided by Horns, once traveled 16 hours by bus from her home in the countryside to learn repair techniques from Mr. Gage. Trained by Horns volunteers, equally intrepid Cubans can fix a dented trumpet as cleverly as they can a Buick bumper. 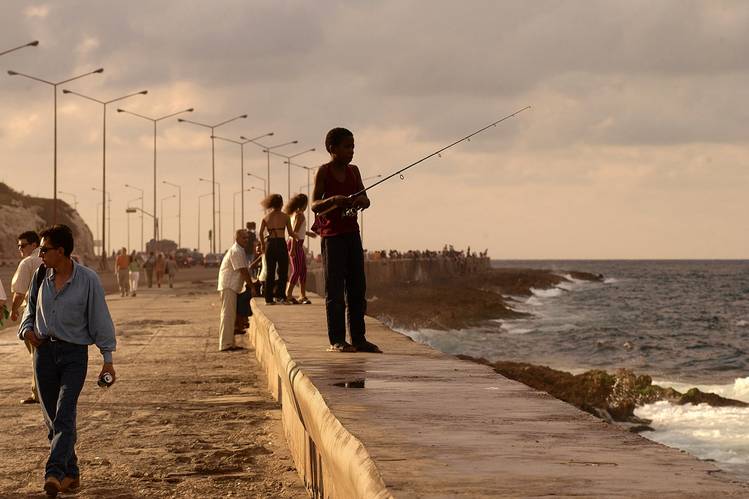 “We recycle everything,” said Marcel Quintana, whom I met at the workshop where he and other Horns-trained artisans perform free surgery on wind, brass, and stringed instruments. “In the past, people would shave down telephone wire for strings. They’d make clarinet pads from pig intestines.”

At the end of another day, Ms. Sillins and I joined the rest of the Horns crew in Old Havana for a recital at the Basilica de San Francisco de Asis. Almost three centuries old, it’s a soaring space punctuated by shafts of sunlight and it made an exquisite setting for a concert that included Mozart, Bach and Pachelbel. The teenage performers looked proud as they took their bows, but none more than 16-year-old José Osvaldo Hernandez, who received a violin from Horns. “It’s the first instrument I have owned in my entire life,” he later told me.

After the recital, the lanky violinist and his family celebrated with us outside at Café El Mercurio, in the grand old Renaissance-style building that once housed Cuba’s stock exchange. Strangers stopped and listened as he tried out his gift. Four strolling troubadours blessed the occasion with some vintage songs. 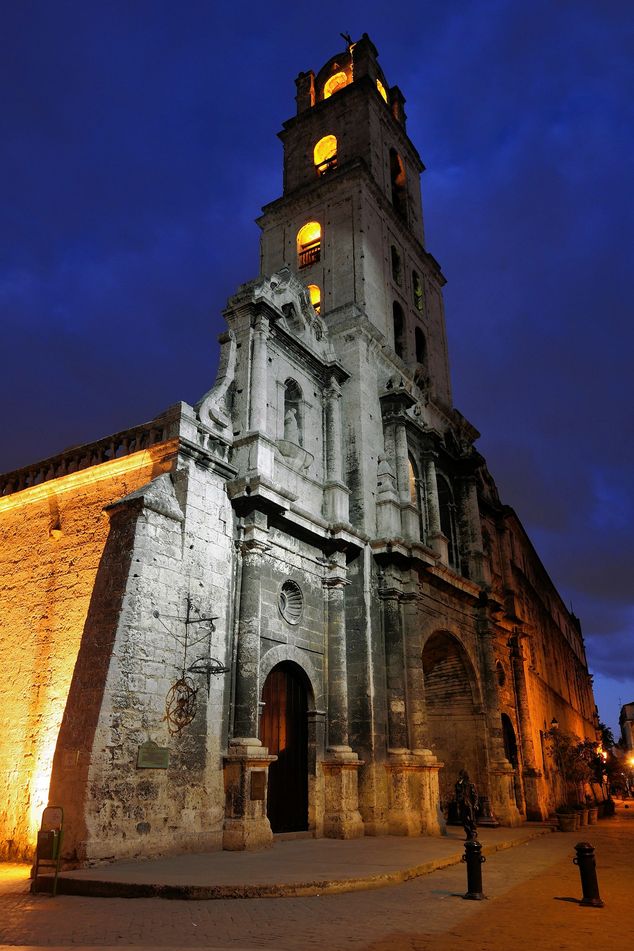 Local Horns staffers recommended the best spots for music that night. Two of us chose the cavernous Casa de la Música in Central Havana, where two chicas invited us to a people-to-people encounter on the dance floor. Judging by our perspiration, I would say we satisfied U.S. Treasury requirements for a “meaningful interaction” that “promoted the Cuban people’s independence from Cuban authorities.”

Treasury regulations cautioned that our itinerary should “not include free time or recreation in excess of that consistent with a full-time schedule.” They did not specify what constituted “excess.” So, watching the clock, I spent an hour snorkeling in the aquamarine waters off Havana’s Playa Bacuranao.

Havana has close to 30 museums, but unless you’re licensed for professional research, the Treasury doesn’t want you going alone. Again eyeing the clock, I squeezed in the two branches of the spectacular Museo Nacional de Bellas Artes—one embracing world art from 500 B.C. to today; the other devoted to Cuban works. I also whipped through the Museo de la Revolución, where a satirical gallery of “cretins” that included President Reagan and both Presidents Bush was pretty much like watching MSNBC.

Music remained the main attraction for me. In a city where iPods have yet to take hold, handmade music spilled from practically every window and doorway in flavors—rumba, timba, son—as varied as the iridescent syrups street vendors poured onto shaved-ice granizados.

On my last morning, I stopped by the Conservatorio Amadeo Roldán, whose students had given the classical recital. The august academy was a supercollider of youthful energy. Its uniformed students bounced off each other as they raced around its loggias. Scales from their trumpets floated up through the atrium.

I saw Mr. Hernandez, cradling the violin he’d received a few days before. “I play it all day,” he said. “At night, I fall asleep with it.”

God forbid he should roll over and break his bedmate. But, if he did, Horns to Havana could repair it.

TOURIST TRAVEL TO CUBA is still prohibited by U.S. law, though trips that fit about a dozen approved categories are permitted. As a practical matter, it is easier to visit with a group. Prices for 8-day group tours range from $1,800 to $4,800, excluding airfare. 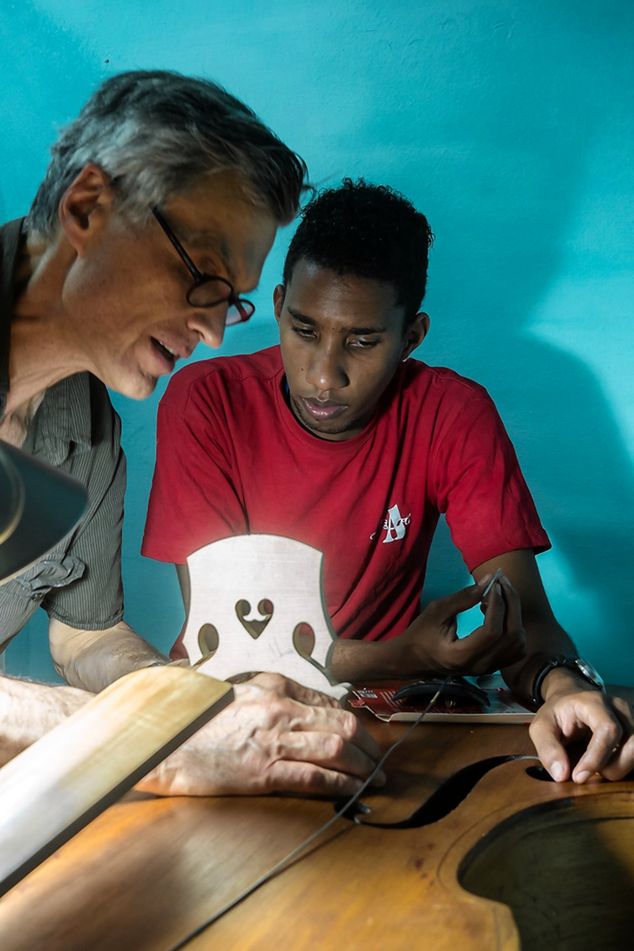 Horns to Havana (hornstohavana.org) organizes one or two trips a year and can refer you to the travel agents it works with. Many nonprofits arrange musical journeys regularly, including Plaza Cuba (plazacuba.com); Insight Cuba (insightcuba.com); and Cuba Explorer (cubaexplorer.com).

It’s also possible for a sports team, church or most any group to visit Cuba legally—provided it has a sponsoring organization and is accompanied by its representative. Marazul Charters (marazul.com) will handle all of the details and can also arrange air transportation.

In March, Cuba Travel Services began weekly service from New York’s JFK airport (from about $850, cubatravelservices.com). Daily departures are also available from Miami International Airport. JetBlue offers charter service from Fort Lauderdale and Tampa and will begin service from New York in July; tickets must be booked through a travel agent.

A Havana hot spot when it opened in 1957, the NH Capri is once again among the city’s best hotels (from about $170, nh-hotels.com). Accommodation in private homes—casas particulares—is plentiful thanks to sites including Airbnb.com and havanacasaparticular.com.