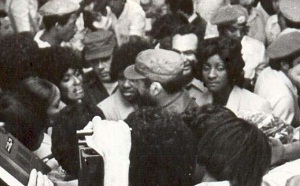 These were Fidel’s first words on welcoming home the volleyball players who had won gold medals at the 4th North, Central American, and Caribbean Volleyball Championships in Los Angeles, August 1975.

Perhaps for the rest of the world, the event was just one more competition, which would provide the gold medal winning women’s and men’s teams their qualification for the 1976 Montreal Olympic Games. However, for Cuba, the event had a special meaning: the young players made up the first Cuban sports delegation to enter the United States, 16 years after the triumph of the Revolution.

Fidel, whose love and passion for sports were well-known, was attentive to the training of the selected team and, days before their departure to Mexico City – where the group made a brief stop before traveling on to Los Angeles – he held a lively encounter with the two teams, encouraging them to fight for victory against the U.S. teams, the favorites to win. He explained to them what the competition meant to the homeland, and urged them to conduct themselves respectfully with the public, who especially filled the California Sports Arena during the decisive games.

Although the temperature was pleasant in the training fields at the University of Irvine and the accommodation for the delegations provided a pleasant rest, the volleyball court limits were close to the first rows of seats in the stands, so the athletes were within reach of the spectators.

While the Cubans received sincere expressions of friendship during the games, there were also insolent provocations aimed at offending them which, did not however manage to cloud the moment when, at the closing ceremony, the solitary star flag waved and the notes of the national anthem were heard twice.

Upon their return, Fidel and Raúl were the first to welcome the champions upon landing at José Martí International Airport, at the foot of the plane steps.

Beyond posing for photos with the two teams, the leader of the Revolution directed a stream of questions at the women’s team. He asked what province they were from; what they thought about the rivalry in the event; what the qualities of their opponents were; how the food was; if there were good conditions to rest. He also inquired about the organization of the tournament; the climate and the environment that surrounded the Californian public university; how they had been welcomed by the fans; if they had received the visit of the Venceremos Brigade; in addition to offering his assessment on the technical aspects of volleyball.

Those of us who participated in the meeting in Havana, prior to the delegation’s departure, considered that welcome the continuation of an open exchange of opinions, as from a father with his children.

The Comandante en Jefe turned what many of us had imagined to be a brief meeting into a pleasant conversation that extended over an hour in the airport lounge, accompanied by Vilma Espín, president of the FMC; Celia Sánchez, Secretary to the Presidency; José A. Naranjo, assistant to the Comandante en Jefe; Jorge García Bango, head of INDER, and Manuel González Guerra, president of the Cuban Olympic Committee.

It was an hour of talking sports with Fidel. And it passed by as swiftly as the speed at which his thoughts flowed.