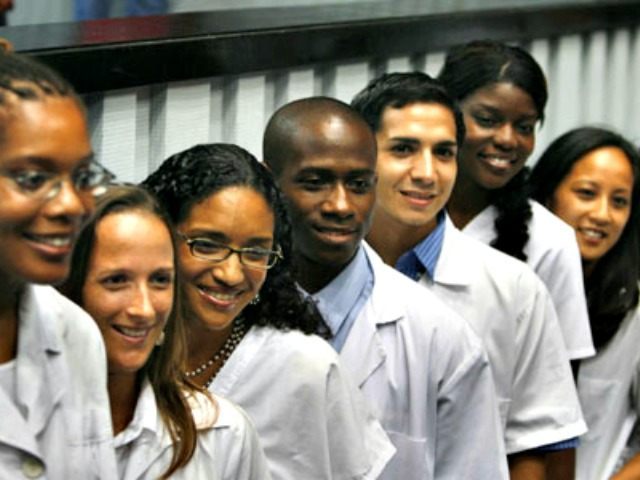 The death of Fidel Castro, for those of us living in the belly of the beast, has meant being forced to endure non-stop lies and hypocrisy from the mass media about Fidel. According to our “free press,” Fidel was a “brutal dictator” who would not allow “democratic” elections like we have here. Two words put the lie to the story that U.S.-style elections bring justice and prosperity: Donald Trump.

Over and over again we hear that Cubans are ground down by poverty, live in hovels, are being starved and have miserable health care. Yet Cubans live longer, on average, than people in almost every other Latin American country. Cubans live as long as those in many rich European countries.

Cubans live as long as we do in the good old capitalist U.S., and life expectancy in the U.S. is going down. How is it possible that Cubans live so long if the Cuban economy is such a wreck?

We are told that Fidel wants to keep Cubans ignorant. Yet the first thing his government did was eradicate the illiteracy that Cuba’s former masters had allowed to flourish. Today, illiteracy in the U.S. is still an unacknowledged scourge among the poor. In the bad old days, it was even a crime to teach slaves to read.

We are told that Fidel wants to keep Cubans ignorant. Yet the first thing his government did was eradicate the illiteracy that Cuba’s former masters had allowed to flourish.

We are told that Fidel executed a few hundred of the former dictator’s henchmen after the revolution. The U.S. promotes death squads throughout Latin America, maintains deadly domestic police forces that shoot to kill on a daily basis, and kills untold thousands every year through poverty and war all over the planet.

We are told that Fidel allied his country with the Soviet Union. The U.S. allied itself with apartheid South Africa, with the European colonialists, and with dictators and repressive regimes in every corner of the world far too numerous to list here.

We are told that Fidel sent troops to Africa to support independent Angola and to fight South Africa. The U.S. sent troops to Vietnam, to the Dominican Republic, to Grenada, to Panama, to Iraq, to Afghanistan. The U.S. maintains military forces all over the globe, on land, on sea and in the air – the largest military force in history.

We are told that Fidel let the Soviet Union put nuclear weapons in Cuba. The U.S. dropped atomic bombs on Hiroshima and Nagasaki, and still has thousands of nuclear warheads ready and waiting to destroy civilization at the push of a button.

We are told that Fidel allied his country with the Soviet Union. The U.S. allied itself with apartheid South Africa, with the European colonialists, and with dictators and repressive regimes in every corner of the world.

Has Cuba ever invaded the U.S.? It was the U.S. that organized the notorious Bay of Pigs invasion of Cuba.

Has Cuba ever occupied any U.S. territory? It is the U.S. that occupies Guantanamo.

Has Cuba ever imposed an economic embargo on the U.S.?

Fidel’s real crime, of course, was kicking the Mafia out of Cuba, of nationalizing American corporate holdings, building schools instead of providing cheap labor for the capitalists, organizing a universal and free health care system instead of creating profit centers for medical and insurance companies, slashing rents instead of allowing landlords to get rich, giving people jobs that build up the country rather than jobs that build up the wealth of a ruling class.

If that is “dictatorship,” we need more of it.