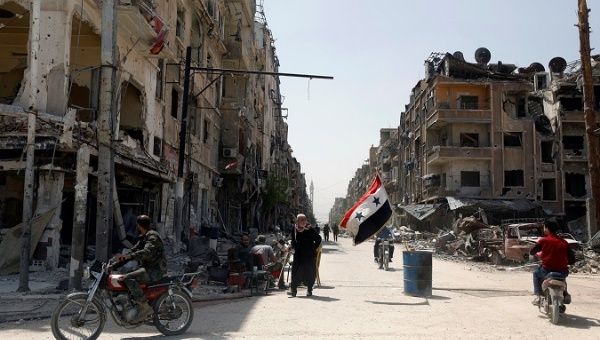 A Syrian flag flutters in the wind on a war-ravaged street in the city of Douma in Damascus, Syria. | Photo: Reuters

Syria’s assistant foreign minister said that “unlike the Western stance,” Syria still “respects the international legitimacy and the work of international organizations.”

“If they are saying that chemical (weapons) were used in Ghouta, and if (U.S. President Donald) Trump or France and Britain really wanted to know the truth, they should have provided appropriate conditions for the OPCW to carry out its mission as it’s the organization involved in this matter, and not to encroach upon the work of the international institutions and launch accusations and verdicts and then implement punishments,” Sussan told Xinhua on Saturday.

“When the investigation team conducts its work it will expose the lies of the Western allegations and the accusations they have made about the alleged attack in Douma.”

The OPCW team arrived in Damascus on April 14, only hours after the United States, United Kingdom and France launched missile strikes against the Syrian capital in ‘retaliation’ for the alleged attacks.

The team faced difficulties entering Douma, however, coming ‘under small arms fire’ that forced them to return to Damascus. Reports emerged that the team had entered Douma again on Friday, although no further details have emerged.

“On the other hand, they thought that by striking Syria they would have covered the lies they had circulated to other Western countries.”

The official said that, “unlike the Western stance,” Syria still “respects the international legitimacy and the work of international organizations.” When Syria joined the Chemical Weapons Convention in 2013, it had given up all of its chemical stockpiles, he said.