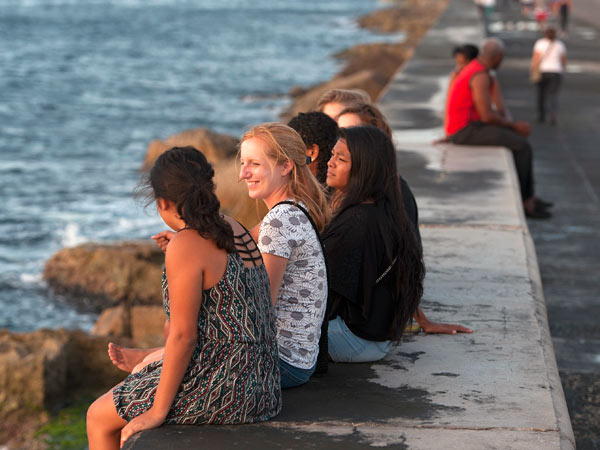 The Earth, torn to shreds by the ogre’s bite, is in its paws. Grappling hooks strain to drag down the beast.

In a country virtually devoid of commercial advertising, such anti-imperialist images and slogans abound.

Studying in a communist country is an adventurous choice for any American. But the 21-year-old Crilley and her classmates in a one-of-a-kind program run here by Arcadia University were treated this spring to an extra dose: They were among the first eyewitnesses to the reactions and aspirations of ordinary Cubans as the U.S. and Cuba start to repair ties severed a half-century ago.

It’s been exciting,” said Crilley, an Arcadia junior from Schnecksville, Lehigh County. “There has been a lot of interest in us as Americans. People asking us about our opinions” – and sharing their hopes that a diplomatic thaw is near.

Her primary course on U.S.-Cuba relations – presented from Cuba’s point of view – opened a window on Cuba’s psyche. Over months on the island, Crilley also glimpsed the signs of a rapprochement:

The Stars-and-Stripes-print clothing popping up on Havana streets.

The paquete, a weekly download of arts, culture, and music from all over, which circulates surreptitiously via thumb drives, but no one really knows its source.

The state-run channel that broadcasts CBS’s hit The Good Wife every morning in English, with Spanish subtitles.

“When we signed up we didn’t realize that [Presidents Obama and Raul Castro] would call for a closer relationship,” Crilley said as she dangled her feet over the seawall of the Malecon, Havana’s famous oceanside drive. Ninety miles across the water lay Florida.

As the months passed, “we were hoping the U.S. Embassy would open while we were here so we could go see that,” she said. “Not yet.”

On Tuesday, days before their eye-opening semester at the University of Havana was to end, Crilley watched the sunset with five of her six classmates.

While about 50 American colleges run Cuba programs lasting a week to a few months, only Arcadia maintains a presence in Cuba across the fall, spring, and summer semesters, said Tim Barton, director of student services at Arcadia’s College of Global Studies, which began its residential program here in 2013.

The other students on the seawall with Crilley and Perez attend colleges that participated in Arcadia’s program. All arrived here on Jan. 22. Alexa Posner, of Colorado, is from Macalester College in St. Paul, Minn. Hannah Garcia, of Tennessee, is from Lipscomb University in Nashville. Rebecca Acebal of New Jersey, attends Georgetown University.

Jade Harvey, 19, of Los Angeles, is from Yale University. Kylie Grow, 20, who grew up in Cheltenham, Montgomery County, attends the University of Virginia. They’re the group’s politics junkies.

“Some of the Cubans we talk to are slightly concerned about a new wave of imperialism from the U.S.,” said Harvey, “but that in no way overrides their excitement at the thought of having the economic sanctions taken down. That is the one big thing everyone here talks about.”

Diplomatic relations between the countries collapsed in 1961, two years after the revolution that brought Fidel Castro to power, and a year before Russian nuclear missiles aimed at America were discovered on Cuban soil, producing the missile crisis and showdown that forced their removal.

A punishing U.S. embargo on Cuba’s economy followed. And while the two nations have occasionally traded barbs, neither side has blinked.

In December, seeking to end the “outdated approach” that for more than half a century has failed to bring democracy to Cuba, Obama announced policy changes aimed at warming relations.

He eased restrictions on U.S.-citizen travel to the island and called for the reopening of a U.S. embassy in Havana. He instructed the State Department to review Cuba’s designation as a state sponsor of terrorism. He called for an easing of certain commercial activity outside the general economic embargo.

“It does not serve America’s interests, or the Cuban people,” he said, “to try to push Cuba toward collapse.”

The next month, as Crilley headed for Cuba, where Internet access is abysmal, she tweeted: “Going off the grid for a while! Adios amigos.”

She and her fellow students said last week that they feel transformed by their exposure to Cuban people and to the flip-side view of world events they had studied in America.

“The victory of Bay of Pigs – victory for Cuba, as they call it here. That’s a big deal,” said Grow, the University of Virginia student. “It’s widely celebrated as the first victory over the imperialists in Latin America. It’s a cultural thing they are very proud of. . . . Defeating U.S. efforts to control Cuba.”

The April 1961 Bay of Pigs invasion, during which 1,400 CIA-trained Cuban exiles failed to overthrow Castro, certainly was disastrous from America’s point of view.

Elena Moreno, of Spain, Arcadia’s resident director, said it felt like “walking into history” when she took the job two years ago.

“I felt things were going to change, and that is happening now” but slowly, she said. “The [Cuban and American] people really do not have anything against one another, and that is something our students could feel.”

The power of the cross-cultural exchange seemed to come across most strongly in their political economy class, where the American and Cuban students were graded on their responses to a number of questions, including: Does the American Dream exist?

Some Cuban students, citing challenges for immigrants and racial minorities in America, said, “How can the American Dream exist if there is not equal opportunity?”

That drew a response from other Cubans in the class, Harvey recalled.

“Well, we have equal opportunity,” they said, citing universal access to free education and health care in Cuba, “but is there any such thing as the Cuban Dream? Not really, because there is not much space to grow.”

It was the A-side and the flipside of a teachable moment.

By Michael Matza, The Inquirer, philly.com