Students to travel to Cuba for study

Students will spend their spring break experiencing diverse culture and learning about complex history and politics when they tour the Caribbean nation of Cuba. 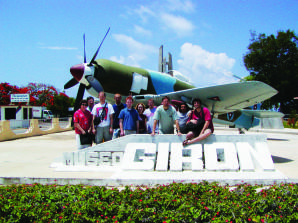 Students will visit Bay of Pigs, site of failed US invasion

“[The field study] was planned to give students as well as faculty the rare opportunity to explore, see and experience the politics of Cuba, [its] history and see how it has affected the landscape and the cultural landscape,” Scott Brown, professor of geography, said.

Because of Cuban leader Fidel Castro’s political stance on communism and a United States embargo against Cuban trade, for more than 50 years it has been illegal for non-Cuban Americans to travel to Cuba as tourists.

Other United States citizens can travel to the country only for religious or educational purposes, and they must receive government permission to do so.

Therefore, to secure rights to travel to Cuba, Francis Marion University (FMU) applied for authorization and received a General License from the United States Treasury Department for the purposes of educational travel.

While in Cuba, students will visit significant historical and political sites.  These include Bay of Pigs, site of the 1961 failed U.S. invasion of Cuba, San Juan Hill, site of the Spanish American War of 1898 and the Museum of the Revolution, which ignited Cuba’s socialist transformation in 1959.

Attendants will also see how the renowned Cuban cigar is made from its raw materials to its finished product when they tour the Partagas Cigar Factory in the country’s capital, Havana.

By hearing Cuban music and watching dances, students will witness how the Hispanic and Afro-Caribbean cultures have merged across the centuries.

Brown said Santeria religion is a chief example of this blend and hopes students will be able to witness a ceremony.

“Santeria is a West African religion in origin that is similar to voodoo,” he said.  “It is very common throughout Cuba and is practiced alongside Catholicism.”

Brown said the greatest lesson students can learn from the field study is to “broaden their horizon and open their minds” and understand what they have been taught about Caribbean and Latin American culture in a way that only firsthand experience could provide.

This latest field study will be geography department’s third visit to Cuba.  The first was in May 2001, the second, in May 2003.