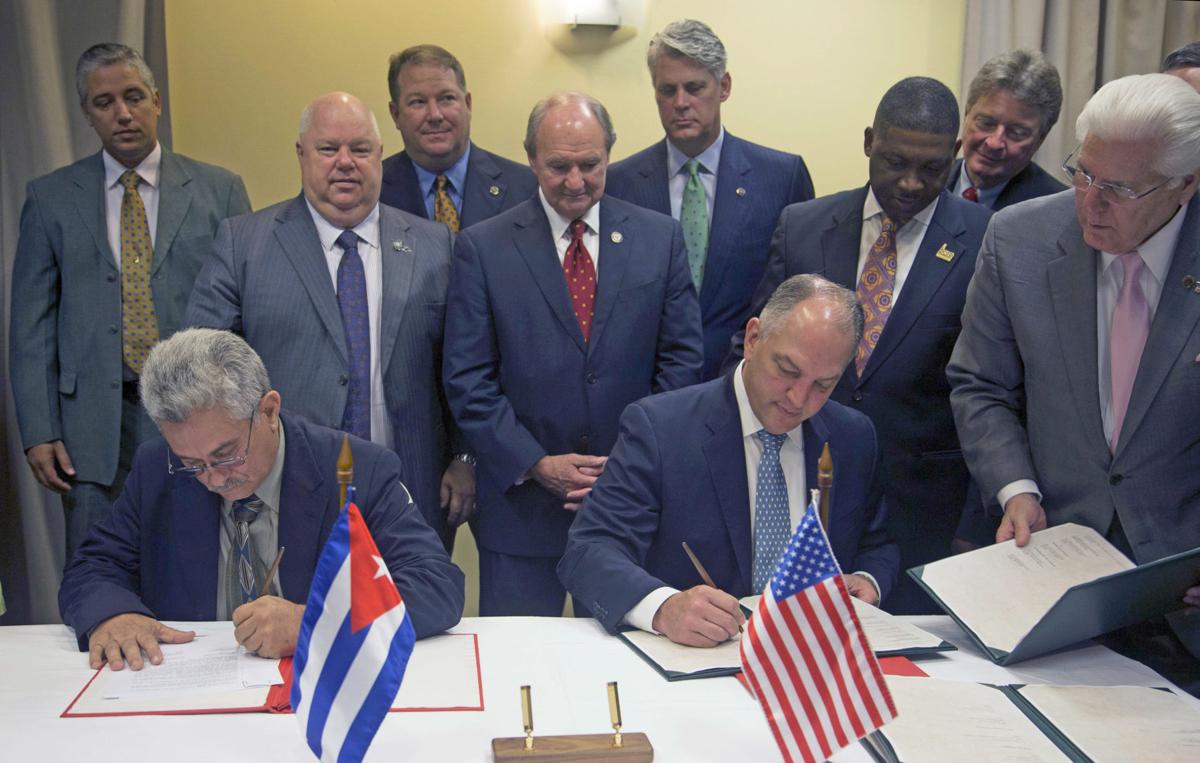 Manuel Perez, Director General at the National Port Administration of Cuba and Louisiana Govenor John Bel Edwards sign ceremonial agreements between Cuba and the state of Louisiana on October 4, 2016, signaling a trade commitment.

The simmering tension of late between Cuba and the U.S. has dampened efforts to lift trade restrictions with the island nation, but not snuffed them out, and for that Louisiana should be grateful.

After decades of severe restraints, things started looking up in 2014 when then-President Barack Obama re-established diplomatic relations with Cuba and reduced travel and export restraints.

Then in 2016, Gov. John Bel Edwards took a trip with about 50 others to Havana, Cuba, to extend the olive branch. He signed memorandums of understanding with the intention of inking formal trade deals once full relations resumed.

But a spate of mysteries incidents that harmed U.S. diplomats in Cuba has set matters back, deflating the progressive spirit of the state’s top staff and leading to the expulsion of Cuban officials from the U.S.

The Trump administration further tightened the reigns on Nov. 8 by announcing more sanctions and travel restrictions.

Louisiana farmers stand to gain from a good U.S.-Cuba relationship, perhaps most of all. Existing laws allow businesses to export agricultural products to Cuba, but require Cuba to pay cash up front — which isn’t easy to do.

Because of this rule, American agricultural exports to Cuba have dropped every year since 2009, according to the state Commissioner of Agriculture Mike Strain.

“Our businesses, our farmers, and our families deserve the freedom to buy, sell, and travel wherever they wish,” Strain wrote in a guest column published by The Advocate. “To our representatives in Washington: Lift these burdensome restrictions; Louisiana is ready to do business in Cuba.”

And it seems Washington is listening.

U.S. Rep. Rick Crawford, R-Arkansas, has drafted a bill that would remove the restriction that requires Cuba to pay up front in cash.

Louisiana led the nation last year with $114 million in exports to Cuba. Some say that number could grow to $500 million if restrictions were removed.

As the country proceeds with caution, Louisiana farmers will be hoping for relations to prosper. And so will we.