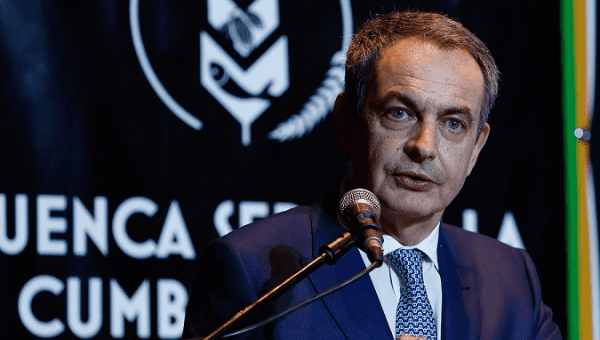 On Friday Venezuela’s National Electoral Council invited Spain’s Congress of Deputies to send a delegation to observe the elections.

Zapatero, who participated in peace talks between the Venezuelan opposition and the government to secure an agreement for coexistence, said that continued dialogue was the only way to produce meaningful results.

“In international relations and conflict resolution I only see one way which is one of peace and dialogue… to sit together once and again, the timed needed, because the alternative can only be a disaster, a civil conflict,” Zapatero argued.

He explained that the current conflict in the South American country had “two readings, with two ideological conceptions that need to be understood sooner or later, in a coexistence agreement that must be revived.”

One solution Zapatero proposed is full participation in the country’s May 20 presidential and legislative election stating “there is no other way out for Venezuela other than dialogue and consensus.”

Zapatero also condemned the United States policy on Venezuela stating: “I do not agree with the policy that President Trump has set for Venezuela, with Trump they changed many things, but I do not, I simply do not agree.”

Zapatero’s comments come just days after Venezuela’s National Electoral Council (CNE) invited Spain’s Congress of Deputies to send a delegation to observe the elections. “Given the expressed interest by Spain’s Congress in Venezuela’s situation, the electoral power thinks the presence of a legislative delegation to participate in the observation program would be very positive,” the CNE said.

On April 12 the congress of deputies approved a motion to not recognize the Venezuelan elections with 164 votes for, 94 abstentions and 79 voting against.

Despite the international boycott, Caracas has confirmed the participation of over 2,000 international observers and accompaniers from Asia, Europe, North America, and Latin America and the Caribbean.