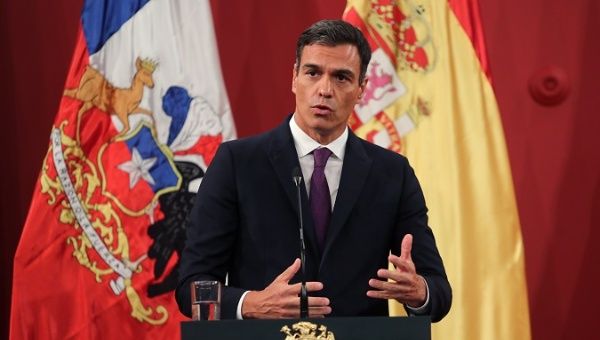 Spanish PM Pedro Sanchez urged for a dialogue with no foreign intervention in Chile, the first stop in his Latin America tour.

August 28 (teleSUR) The Spanish Prime Minister Pedro Sanchez said Monday that dialogue without interventionism is the best way to find a solution to the socioeconomic issues Venezuela has faced over the last few years.

Sanchez made the comments in Chile, during a joint press conference with Chilean President Sebastian Piñera, a staunch detractor of the democratically elected Venezuelan President Nicolas Maduro, in the first stop of his Latin American tour.

“Venezuela has to start a dialogue among Venezuelans to find a solution to this political crisis. And of course, the international community must accompany that dialogue,” Sanchez said.

“I guarantee Spain will be very active in that… Spain belongs to the European Union and has strong roots with Ibero-America that we wish to maintain, but without interventionism,” Sanchez warned.

Sanchez’s remarks mark a shift in Spanish-Venezuelan diplomatic relations, which were characterized by hostilities under Prime Minister Mariano Rajoy.

Hyperinflation and induced shortages of staple goods have motivated many Venezuelans to abandon their country in search of better opportunities. The Venezuelan government has recently enacted several economic measures to fight what they call an “economic war” waged by the United States through economic and financial sanctions and the country’s economic elites.

“It’s a crisis that’s been growing for some time in Venezuela and we, of course, look at it with deep concern,” Sanchez said.

In recent weeks, Ecuador and Peru have tightened their entry requirements for Venezuelans, and an angry mob in Brazil attacked a group of migrants sending them back across the border.

Sanchez will travel to Bolivia Tuesday. He is expected to be welcomed by president Evo Morales to discuss economic cooperation and investment in the bi-oceanic railway corridor.

Pedro Sanchez will later head to Colombia and Costa Rica.