On the second day in Cuba, the Salukis conducted a local kids clinic, visited a local craft market, played a second game against the Cuban National Team and went salsa dancing.

Local boys and girls of all ages came out to the game arena (the Colisea de la Ciudad Deportiva) to learn from the Salukis. The kids went through ball handling and shooting drills for about 30-45 minutes before the Salukis took on the Cuban National Team. A local TV station even came to the arena to film the camp and interviewed the kids and Coach Hinson afterwards. After the game, SIU went to a local craft market, Local Cubans sold everything from art, coffee mugs, t-shirts, Cuban baseball jerseys, humidors, and everything else you can imagine.

In the evening, the Salukis took a salsa dancing class from the locals. Eric McGill was brought up to the front of the class to teach along with the instructor. At the end of the lesson, several coaches and players faced off head-to-head to determine a champion. Assistant coach Brad Autry won the coach competition, and Rudy Stradnieks won the player competition. 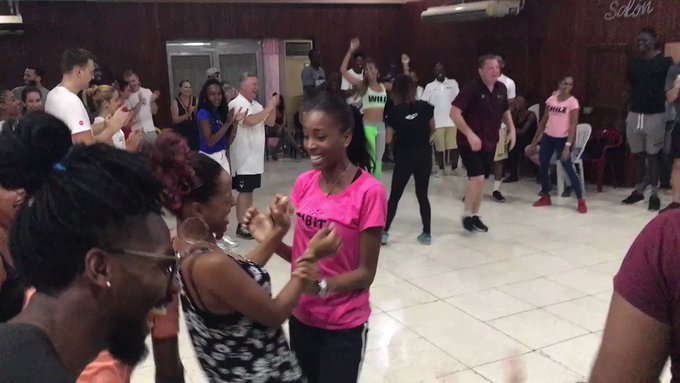 Coach Autry was fired up to be named the coach salsa dance champ.

The Cuban National Team stormed out to an early lead and held on for an 80-69 win over the Salukis to even the series at one game apiece. Yoanki Mensia, who plays professionally in Argentina, led the Cubans with 22 points.

“If you beat a team for the first time ever–we were the first NCAA team to beat them here in Cuba–we knew we were going to get their best shot, and we did,” head coach Barry Hinson said. “They were really good. I thought we competed. We didn’t shoot the three very well; we were 4-for-26; it will take a while to get adjusted to the international line. But I was proud of our guys. We got down by 23 points and pulled it back to 11. We competed. That’s the biggest thing.”

Kavion Pippen led SIU for the second-straight game, this time with 16 points on 5-for-7 shooting. Sean Lloyd, Jr., added 13 and Rudy Stradnieks had 10 for SIU.

“We’re having a hard time matching their physicality and their length,” Hinson said. “You’re talking about guys who are 6-7 or 6-8 grown men on the perimeter. KP (Pippen) is strong enough to match that physicality. He was a target today; they know he is a really good player. He continues to get better. We had some great play by our guys today; it was another great learning lesson.” Check back to SIUSalukis.com for updates on the rest of the trip, including another game vs. the Cuban National Team, a trip to the US Embassy, and a fun two days at a resort in Varadero.