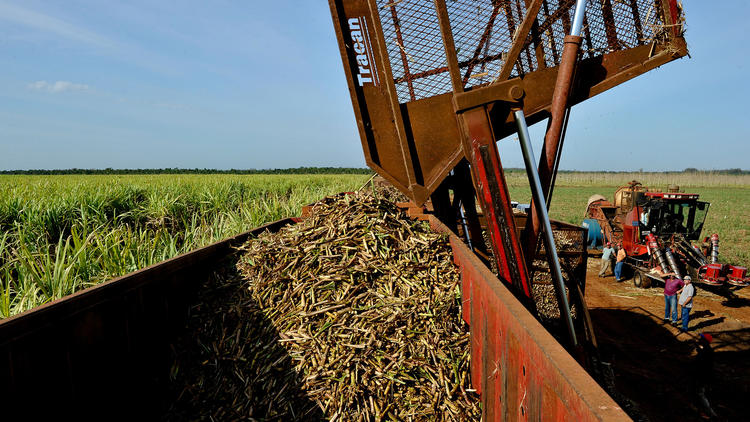 Before the Cuban Revolution, Maryland’s relationship with the Caribbean island was lots of sugar and spice.

Baltimore-based McCormick & Co. and the defunct Baltimore Spice Co. did business there, and when a sugar refinery opened in 1922, a U.S. senator from Maryland called Cuba, with its sugar cane fields, “a suburb of Baltimore.” The refinery has since become Domino, the waterfront landmark.

While the revolution in 1959 and the U.S. economic embargo that followed put an end to the sweet deal for Maryland and Cuba — once one of Baltimore’s biggest export customers — President Barack Obama has recently raised the prospect of renewed trade.

Obama’s announcement that he intends to normalize diplomatic relations and loosen some economic constraints is a long way from lifting the embargo, a barrier of several laws that would have to be dismantled by Congress. But, as Maryland companies were interested in Cuban prospects when President Jimmy Carter eased some restrictions in the late 1970s, they are again watching to see how these developments unfold.

“We are always looking for new markets,” said Jim Lynn, a McCormick spokesman who added that it’s too soon to say what easing restrictions could mean for the company. “We’ll monitor the changing situation and make a decision about its potential as an appropriate market for us. It’s hard to say how long that might take.”

The Bethesda-based Marriott & Ritz Carlton hospitality company got its start in the late 1920s, but never had a hotel in Cuba. Now, however, the company looks at the island nation and sees potential, said Laurent de Kousemaeker, chief development officer for Latin America and the Caribbean.

“We have interest in developing product wherever our customers go,” de Kousemaeker said. Cuba “doesn’t have much hotel supply today. Just over 300 hotels throughout the country, 51,000 rooms, which is small,” he said, adding that much of the hotel stock is old, or not up to standards that affluent travelers would demand.

The local company with the closest Cuban tie is Domino Sugars, whose refinery on Baltimore’s harbor was opened to great fanfare in 1922 by the American Sugar Refinery Co. and the hyperbolic statement by Sen. Joseph France. The plant has changed hands since, eventually becoming Domino Sugars, most recently bought in 2001 by an affiliate of the Fanjul Corp., owned by four brothers who are native Cubans and heirs to a sugar empire. The Baltimore refinery employs 485 people.

The Fanjuls left Cuba after their cane fields and other property was confiscated by the rebels led by Fidel Castro and Che Guevara, who had toppled business-friendly dictator Fulgencio Batista. One of the brothers, Alfonso Fanjul, 77, a key figure in the American anti-Castro movement, told The Washington Post last year that he’d be open to investing in Cuba again if there were an agreement between his native country and the United States.

Domino Sugars officials declined to comment for this article.

Cuba needs foreign investment to develop its industry, agriculture, tourism, housing, transportation and communications. A half-century of government-controlled economy, low foreign investment and the collapse of its chief benefactor, the Soviet Union, have taken their toll on a country whose capital, Havana, was once the Las Vegas of its day.

The country of 11 million people is smaller than Pennsylvania in land area, with an economy that has been compared in size to that of Tennessee, Hawaii or New Hampshire. Household income is difficult to calculate, but the potential for trade is there. The Peterson Institute for International Economics estimates that U.S. exports to Cuba could reach $4.3 billion a year and imports from Cuba $5.8 billion.

As it stands, under an embargo exemption for food, agricultural and medical supplies sold in cash transactions, the U.S. exports $300 million to $500 million in goods to Cuba a year. It is unclear how much comes from Maryland, as neither the U.S. nor Maryland Department of Agriculture compiles that information.

Maryland’s largest food and agricultural company, Perdue Farms, exports soybeans and high-protein soybean meal to Cuba, but no chicken, said spokeswoman Julie DeYoung, who could not specify the value of the annual exports. As the company has established markets there, she said, “we don’t foresee a dramatic increase in the amount of business we do there.”

The Maryland-Cuba partnership was once substantial. In the 1920s, Baltimore had two top export customers: Britain and Cuba. According to a 1928 Baltimore Sun account, “Cuba ran the gamut” of goods it would buy from the city: shoes, barrels, bathtubs, rubber tires and gloves. Also in the 1920s, Baltimore was the unloading point for shipments of Cuban pineapples.

In the late 1970s, Harry K. Wells, then president and chairman of McCormick & Co., said his company “once did a very nice business” on the island, and — if the opportunity ever arose — would be happy to renew the connection.

Wells made those remarks as President Carter sought to mend relations with Cuba. He reopened the U.S. Interests Section in Havana, which is staffed by the U.S. Foreign Service but does not have the status of an embassy. Carter also allowed one of the travel restrictions to lapse in 1977 and lifted a limited regulation on spending U.S. dollars in Cuba.

With the hope that the trade barrier could be lifted, a delegation from Baltimore and New York took a five-day trip to Cuba in March 1978 to meet with government officials and scout trade prospects. According to Baltimore Sun accounts, representatives of 11 Baltimore companies went along, including officials of the Atlantic Engine Power Co., Maryland Bolt and Nut, and Teledyne Energy Systems.

They came back with varying opinions, some saying the trip had been worthwhile, others predicting that trade barriers would remain for years to come. None signed deals, as that would not have been possible under the embargo.

Four years later, the new president, Ronald Reagan, restored the restrictions that Carter had allowed to expire, and talk of lifting the trade embargo dissipated.

The steps Carter took were not as significant as Obama’s, but formidable obstacles remain in both countries. The Cuban government allows some small private enterprise, which has helped cultivate a growing middle class, but still controls most economic activity and owns major industrial and agricultural production.

Richard Feinberg, a fellow at the Brookings Institution, described the attitude of Cuban leaders toward foreign investment as “ambivalent. They recognize some of the benefits but are also concerned about what they see as adverse impacts.”

The state-owned enterprises don’t want the competition, and Cuban officials are likely to want smaller gaps between the salaries of workers and those in top management, said Feinberg, a professor of international political economics at the University of California, San Diego.

“In general, many Cubans are still of the mindset that large multinationals will take advantage of their power to exploit Cubans and Cuban workers,” Feinberg said.

Philip Brenner, an expert on Cuban economics and politics at American University, said some restrictions will be easier to lift than others. Barriers to U.S. tourism are likely to be the first to fall, he said.

He sees two key obstacles to U.S. investment in Cuba: the rule that companies have to funnel payments to workers through the Cuban government, and the dual currency system of the peso and convertible peso that has existed in Cuba since the 1990s.

There are also claims by companies and individuals seeking compensation for property in Cuba that was confiscated after the revolution. The 5,913 certified claims were valued at $1.9 billion in 1967 by the U.S. Foreign Claims Settlement Commission.

Robert Muse, a Washington lawyer with experience in laws involving Cuba, said the claims carry 6 percent annual interest, bringing the total now — 54 years after 1960, the date of property seizures — to about $7 billion.

Muse said U.S. laws dictate that the embargo cannot be lifted until the claims are settled, though some claims can be waived “in the national interest,” he said.

“As a practical matter, though, it would be very difficult to restore bilateral trade relations with Cuba without settling the corporate claims because of lawsuits that would attempt to seize Cuban government assets on their arrival in the U.S.,” Muse said.

Given practical and political hurdles here and in Cuba, no one expects the embargo to be taken down soon. Two scholars from the Peterson Institute have argued in a recent book that gradual reform would be preferable. Under an incremental approach, they say, Cuba would be less likely to duplicate the change seen in Russia and other former Soviet republics — from communist dictatorship to the rule of wealthy oligarchs.

Barbara Kotschwar, who co-wrote the Peterson study with Gary Clyde Hufbauer, said the Cuban government has a great deal invested politically and symbolically in the status quo.

“The state’s desire to maintain control over the economy” is considerable, and was made clear by Cuban leader Raul Castro, Fidel Castro’s brother, in his speech on the day of Obama’s announcement, as he reaffirmed his commitment to socialist principles.

“The Castros have built their reputation on maintaining the socialist system,” she said.

By Arthur Hirsch, The Baltimore Sun