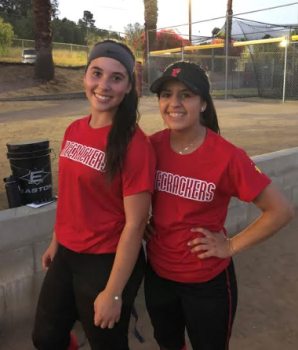 Jacqueline Castro and Sophia Sansone both attend La Salle High and play for the Firecrackers. They will be among the girls traveling to Cuba for the all-star games. (Courtesy photo).

Seven girls from four Los Angeles area high schools will travel to Cuba from July 15 to July 20 with the Firecrackers travel ball softball club as part of the second annual Copa Amistad Tournament and Multicultural event.

Summer Sansone, and Jacqueline Castro of La Salle; Jessica Lopez and Maiya Lopez of Santa Fe; Lily Travieso of Bishop Alemany; Emily Piera of Culver City and Maddy Mekari of Westlake will represent the Firecrackers and the United States in Cuba, as the team of all-stars selected by head coach Manny Travieso will play against teams from Cuba and Puerto Rico.

Last year, Travieso took a group of Firecrackers players to Cuba, where the team competed against the National Cuban Olympic Team, the Jr. Olympic Team, and the University of Puerto Rico among others.

Travieso, whose father was born in Cuba, selected players from across the country,  including his own daughter, Lily, to represent the United States and the Firecrackers. Players will travel to the island for six days. He noted that the experience provides an important perspective for the girls to embrace another culture.

“Here, if your cleats are worn a little bit, you can always go and get a new pair,” Travieso said. “Over there, they sometimes use running shoes for cleats or soccer shoes for cleats. So the girls should have a hell of an appreciation for what they have here.”

“All the girls totally enjoyed playing these amazing athletes, and against women that we’ve seen on TV,” Travieso added. “After that game, they extended the invitation for the second time.”

Regina Castro, mother of rising senior Jacqueline Castro, said the experience was impactful as a parent, simply because she wished for her daughter to see another culture vastly different from her own.

“It’s a once-in-a-lifetime opportunity for her, and it’s something that will reflect well on her college resumé,” Regina Castro said. “Not only is it playing softball, but it’s a multi-cultural event, so they all get to learn a little bit more about the girls over there.”

The team will continue to practice in the weeks leading up to their departure to Havana, and Travieso expressed optimism that this year’s trip will prove to be as fruitful as last year’s journey.

This entry was posted in Cultural, Normalization of Relations. Bookmark the permalink.