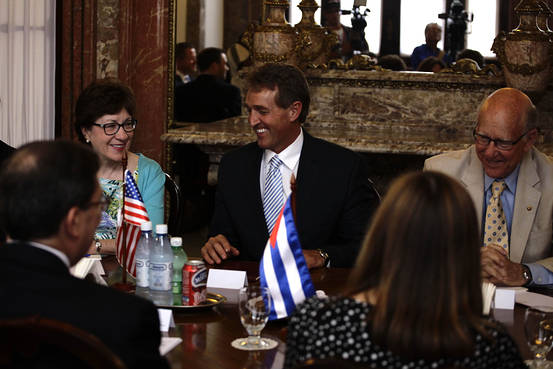 A bipartisan pair of senators is pressing the Obama administration to take more executive actions in 2016 to increase the chances that Congress will act to lift the Cuba embargo.

Both senators traveled to Cuba on the secret Dec. 17, 2014 trip to pick up U.S. Agency for International Development contractor Alan Gross from prison and again with Secretary of State John Kerry for the embassy opening in August.

Thursday marks the one year anniversary of Mr. Obama and Cuban President Raul Castro’s announcement that they would begin to take steps to thaw relations between the two countries after over 50 years of Cold War enmity.

“The coming year represents a critical opportunity for meaningful advancement of these objectives,” they said in the letter.  “Within the finite time remaining, continued progress in the regulatory arena represents the best strategy for resilient changes in the U.S. and Cuba as well as increasing the prospects that Congress will act.”

Mr. Obama said in an interview with Yahoo News this week that he thought it was “conceivable” Congress could act next year. While Mr. Obama has Republican allies like Flake as well as about a dozen others in the House and the Senate, the GOP is largely opposed to the policy shift.

In their letter Wednesday, the senators urged the swift completion of talks to resume direct air service and to consider “creative solutions” in talks with Cuba to resolve issues related to billions of dollars of competing claims.

Officials said this week that the U.S. and Cuba are close to completing civil aviation talks, which will make it much easier for authorized travelers to go to Cuba from the U.S. The senators urged Mr. Obama to loosen travel restrictions further so that Americans can conduct independent cultural exchanges in Cuba rather than go with tour groups as U.S. regulations currently require.

“Unfortunately one culprit is U.S. regulations, which require goods be sold directly to individual Cuban buyers,” they said, calling this arrangement “impractical” given current conditions in Cuba and urged alternatives to allow U.S. exporters to use existing Cuban commercial channels already in use for the export of U.S. agricultural products.

Banks are wary of Cuba’s small market because of perceived compliance risks, the senators said. In spite of regulatory changes so far, transactions between the U.S. and Cuba remain complex and expensive, they said.

“We encourage you to move swiftly to remove unnecessary and unproductive financial regulations that appear incompatible with expanded travel and the development of commercial relations,” the senators said.

The U.S. and Cuba recently began property claims negotiations, one of the most complex hurdles to full normalization. U.S. companies and individuals have $7 to $8 billion claims. Cuba says it has $120 billion in counterclaims from damages stemming from the embargo.

Sens. Flake and Leahy said the administration should consider taking steps to allow people to sell their claims to third parties and negotiate resolutions on their own as possible ways to advance resolving the claims dispute.

Mr. Obama told Yahoo News earlier this week that he is considering taking further executive actions to loosen restrictions on trade and travel to Cuba before leaving office.