Samuel Moncada: Venezuela Does Not Accept the US as an Authority 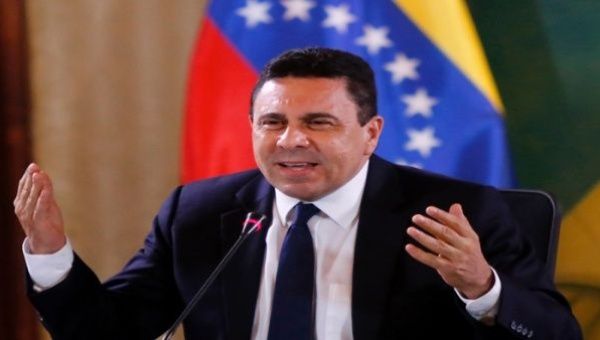 The official demanded from the U.S. Government respect for the peoples of Latin America

Deputy Minister Samuel Moncada reiterated that the U.S. Government is one of the most aggressive and humiliating in the region.

May 7 (teleSUR) The Venezuelan deputy minister for North America and representative to the Organization of American States (OAS), Samuel Moncada, rejected on Monday the statements made by the Vice President of the United States, Mike Pence, and demanded respect for the peoples of Latin America

“We do not accept the US as a court or authority of anything, we are free,” Moncada said in a statement to the media.

The Venezuelan official assured Pence that he represents the “most racist and intolerant government in recent decades, most aggressive and most humiliating” of America, who “is threatening the entire region, extorting and coercing the entire region.”

He also reiterated that U.S. President Donald Trump has expressed himself in demeaning terms about some OAS member states and threatened to revoke the Temporary Protected Status Program (TPS).

“The TPS program has already been taken away from hundreds of thousands of families in El Salvador, Honduras, Nicaragua, Haiti (…) 800,000 Latin Americans are going to be expelled from this country and this president says he cares about the region ”

Moncada recalled that  Article 20 of the OAS Charter prohibits all coercive measures against Member States and stressed that “we can not allow anyone to attack us, from anywhere, much less the vice president of a racist empire that has tried this with the whole region. ”

On the other hand, he called on Venezuelans to participate in the upcoming presidential elections, for Legislative Councils and Municipal Councils on May 20. “I call everyone, on May 20, all in defense of the country against this aggression against this crime that is being committed against Venezuela.”

U.S. Vice President Mike Pence on Monday announced new unilateral sanctions against three Venezuelan citizens and some 20 companies for alleged links to drug trafficking and called for the suspension of the upcoming elections.

In response, Moncada said that “there is no possibility of the elections being suspended,” a timetable has been successfully fulfilled according to statements made by the directors of the National Electoral Council (CNE).

On the other hand, representatives of the Venezuelan opposition sector, Julio Borges and Carlos Vecchio, were present during Pence’s speech and requested more pressure be used against the election in Venezuela.