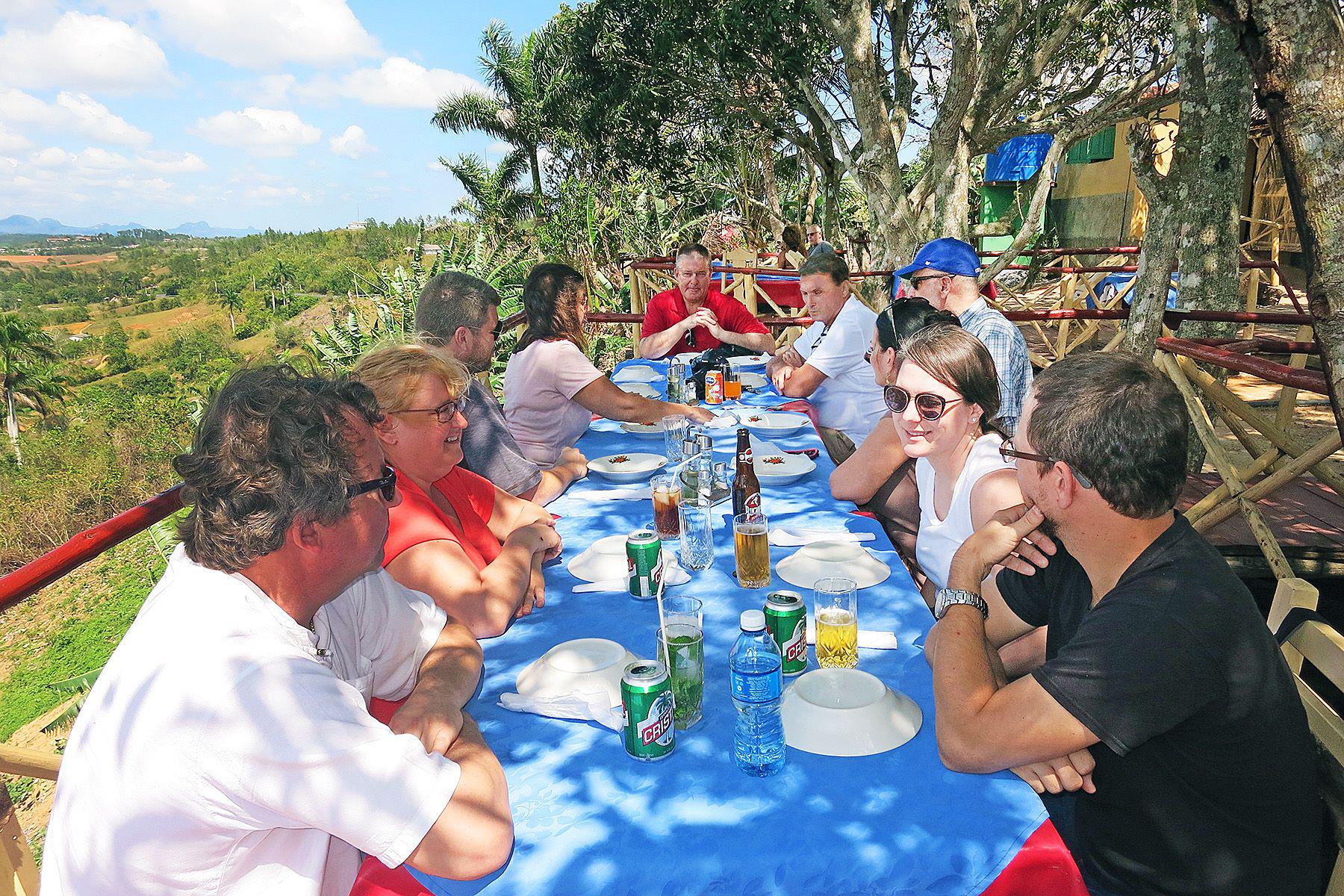 Outdoor restaurant In Vinales. Gobal Relations Travel Club Owner Dan Rutherford says he always tried to eat a restauramts at private homes to help individuals who are allowed to operate them as private businesses. Photo courtesy of Linda Stockton via Facebook

Former State Senator and Treasurer Dan Rutherford says his travel business to Cuba won’t be hurt by President Trump’s plans to reverse Obama-era easing of restrictions on travel and trade. But, Rutherford thinks the president’s policy is a mistake.

“It once again puts that wet, damp blanket over what could be a lucrative trade opportunity that is only 90 miles away,” Rutherford said. He says Cuba is a relatively small market but its proximity makes it a logical partner. For example, he points out Cuba imports 80% of chicken consumed in the country and right now all that meat is coming from Mexico when it could easily be shipped from the US to Cuba using the Saint Lawrence Seaway.

In fact, the US Department of Agriculture has estimated easing trade restrictions could result in $1 billion in sales next year. But, that seems unlikely as President Trump doubles down on the rhetoric that many believed helped him win electoral votes in Florida . He traveled with Marco Rubio, a Cuban-American congressman (R-Florida) earlier this month and announced greater restrictions on travel to Cuba.

Under President Obama’s executive order, individuals could travel to Cuba on their own but had to keep documented proof it was for educational purposes. He also allowed Cubans to buy certain US consumer goods online, plus he opened the door for pharmaceutical companies to do business in the US and to do joint medical research.

President Trump plans to outlaw business transactions that involve the Cuban military which has its hands in almost every business on the island.  Rutherford says he’ll simply go back to getting licenses to bring groups to Cuba using his Global Relations Travel Club and filling out paperwork to certify educational parts of the tour with limited time for recreation.

“The US State Department will issue a list of restaurants you can’t go to because they’re invested in by the Cuban military and I’m like, ‘Ok.’ In fact, we’ve been doing that all along, going to private enterprises everywhere because I happen to believe in that.”  He added, “The only other thing it will do is require we fill out the same kind of paperwork we were filling out before the Obama administration changed the policy and I came from government so I understand how the paper pushers work.”

Rutherford noted the backward shift by the Trump administration seems counter to popular thinking.  He noted polls showing a majority of Americans favor establishing normal relations with Cuba.  Even Cuban Americans who left the Communist country later favor the Obama administration’s efforts to take the country off the terror list and for Cuba to open an embassy in Washington and for the US to establish an embassy in Havana.

So what happens now?  The Trump administration will take the next few months to draw up its executive order.  Congress could take its own initiative and lift the trade embargo that has been in place since the early 1960s.  It was reaffirmed in the Cuban Democracy Act of 1992 in an effort to move Cuba toward democratization and a greater respect for human rights. But Rutherford doesn’t expect that to happen.

“Now that the president has made his proclamation, it’s almost impossible to pull him back.  So I think what’ll happen is for the next 90 days [lawmakers and lobbyists will] try to influence  the regulations; the rules that’ll be promulgated by the Department of Ag, Commerce, Treasury and so forth.  I think that’s where the last attempt to influence on the future of this administration will come,” said Rutherford.

Real change, Rutherford believes, will come with another president.  And in the meantime, he believes the influence of capitalism to move Cuba toward Democracy will suffer along with the Cuban people.