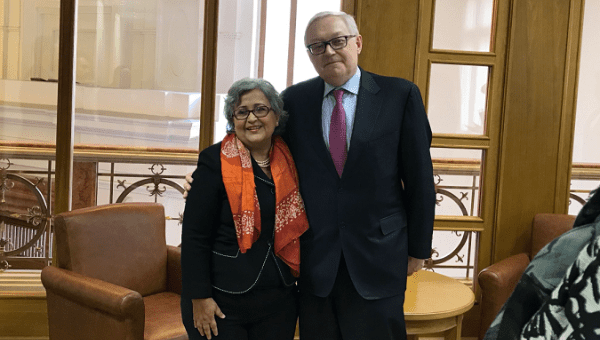 Tibisay Lucena, head of Venezuela’s electoral authorities, visited Russia as part of a tour to explain the electoral system in the world.

April 24 (teleSUR) Tibisay Lucena, the president of Venezuela’s National Electoral Council, is on a visit to Russia speaking to officials about the integrity of Venezuela’s electoral system.

The visit, which is a part of a tour to several African and European countries, has sort to promote the strength of Venezuela’s electoral system.

Lucena was welcomed by Russia’s Vice Foreign Minister Sergey Riabkov, who acknowledged that there is an international attack on Venezuela’s democracy, sponsored by western countries such as the United States, and called for the defense of electoral processes.

“We must unite to defend the clean and democratic electoral processes, like the ones in Venezuela. We can’t tolerate the so-called ‘Color Revolutions.’ The people have the right to choose their governors in a free and democratic way, without foreign interference or violence,” said Riabkov.

The Russian official also declared Moscow’s support for the May 20 presidential elections.

“We support the efforts of the Venezuelan electoral authorities and wish the people of Venezuela success and peace in the incoming elections,” he said.

Tibisay visited Russia as part of an international tour aimed at explaining the Venezuelan electoral system, regarded as one of the most trustworthy by many international observers and organization, such as the Council of Electoral Experts of Latin America (Ceela) and the Carter Center.  She has previously visited Tunisia and Ethiopia.