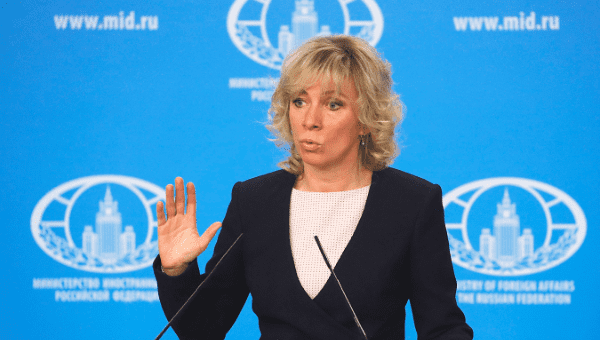 A spokesperson for the Russian foreign ministry said calls to boycott the May 20 elections are a response to the United States’ foreign policy.

May 4 (teleSUR) Russia has criticized calls to boycott the Venezuelan elections scheduled for May 20 and accused the United States of isolating the country to promote regime change.

“The upcoming elections are a great opportunity to achieve civil reconciliation. To lose or ignore them in a premeditated way is shortsighted, and of course, counterproductive,” spokesperson for Russia’s foreign ministry María Zajárova told reporters.

According to Zajarova the boycott announced by some members of the opposition is a response to U.S. foreign policy.

“The calls to boycott the elections from abroad don’t stop. As the date for the vote approaches, Washington not only does not renounce its objective of change the government in the country, but it also increases pressure on Caracas through unilateral measures in an attempt to isolate,” Zajarova explained.

She insisted that the final goal of U.S.-sponsored economic sanctions “is to provoke a debt crisis and as a consequence worsen the socio-economic situation… to create the bases for widespread popular discontent.”

The decision to hold early elections in Venezuela was one of the results of a series of talks between the Venezuelan government and opposition representatives to establish an agreement for “democratic coexistence.”

Some opposition parties backed out of the agreement shortly after new sanctions were announced by former U.S. Secretary of State Rex Tillerson during his Latin American tour.

Following the move, some parties vowed to not participate in the elections. Despite these statements, however, 14 of 18 political parties in Venezuela signed the democratic guarantees agreement before the May 20 elections and former governor, and opposition member Henri Falcon and several others have entered the presidential race with incumbent Nicolas Maduro.

Former Spanish prime minister Jose Luis Rodriguez Zapatero, who served as the mediator during the talks, has also criticized the Venezuelan opposition for abandoning dialogue and failing to participate in the election.