Rodriguez on Tour to Combat ‘Media, Psychological War Being Waged Against Venezuela’ 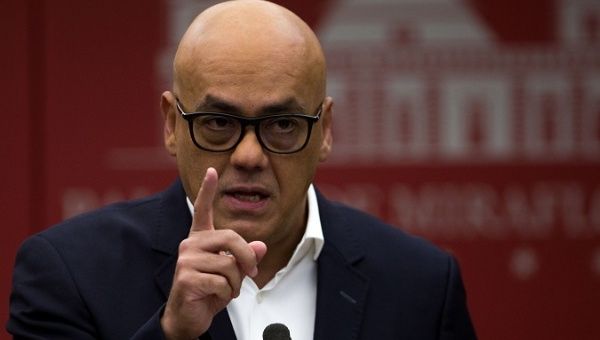 The media tour was announced after the United States scheduled a series of military exercises off the Venezuelan coast.

March 27 (teleSUR) Jorge Rodriguez, Venezuela’s Communications Minister, says international news outlets are playing a significant role in the “media and psychological war against Venezuela.” Speaking in an interview with the BBC, Britain’s public service broadcaster, Rodriguez said that there is a significant amount of misrepresentation taking place in the media about the current socio-economic situation in the country.

“There is a newspaper in Spain that publishes a (negative) story about Venezuela every 36 hours, almost one a day. I ask myself: ‘Is it that other countries do not have problems? Is it that Spain considers it more important to deal with the affairs of Venezuela than with the issues of Spain?” Rodriguez said while pointing out that Spanish media outlets published almost 4,000 negative stories about Venezuela in 2017.

“I think there is a lot of misrepresentation; I believe there is a real operation of a media war, a psychological war, almost a lynching against Venezuela,” he added.

During the interview, Rodriguez also pointed out the contradictions in the international media’s coverage of Venezuela’s upcoming elections and Colombia’s recent legislative elections and interparty primaries, which were marred by allegations of fraud and vote tampering.

“A few weeks ago there were elections in Colombia, and it can only be categorized as a catastrophe… People had to photocopy the ballots; there was vote buying. Like Saramago’s novel “Essay on Lucidity,” there were more blank votes than valid winning votes. I said: ‘Well, the scandal in the European media will be huge.’ It was not so. That is to say, the subject to attack is Venezuela, and we would like with all humility to address the media of the whole world to tell the truth or say in any case what is our truth,” he said.

Highlighting the level of freedom of expression in Venezuela, Rodriguez said there have been, “calls to murder the president, which one sees with frequency in Venezuelan and foreign media, and social media those would not be tolerated in countries like France and Spain.”

Rodriguez, who is on a European media tour designed to expose the current anti-Venezuela agenda, said he plans to visit media outlets and present an alternative view of the country. The tour was launched after the United States Southern Command, based in Florida, announced a series of military exercises off the Venezuelan coast, in Trinidad and Tobago, for April 16 – 26.

Changes in the Trump administration have also pushed Venezuelan authorities to address the biased perception of the country.

In recent weeks, U.S. President Donald Trump has announced the appointments of John Bolton, and Mike Pompeo as senior members of his administration.

Bolton, a former ambassador to the United Nations, has been described by several senior U.S officials as having “always emphasized how Cuba and Venezuela and Nicaragua have undermined U.S. interests throughout the region.”

“He’s a warmonger, and Latin Americans get nervous when American presidents tend to lean toward military versus diplomatic solutions,” a National Security Council official for former President Barack Obama told the Miami Herald. “It’s a militaristic style that won’t go down well in Latin America.”

Days before it was announced that Bolton would replace Herbert Raymond McMaster as Trump’s national security advisor, Pompeo was announced as the new U.S. Secretary of State.

The South American country has routinely accused Washington of planning to orchestrate a coup or invasion, and the appointment of Bolton and Pompeo given their past statements go a long way to supporting these claims.