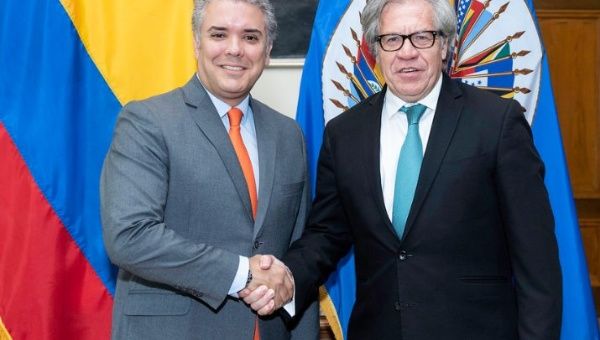 van Duque met with Luis Almagro Friday and vowed to strengthen the OAS by aiding in the dismantling of Unasur. | Photo: @IvanDuque

Ivan Duque called on South American countries to leave UNASUR and vowed to put more pressure on Venezuela as he met with United States and IMF officials.

June 30 (teleSUR) Colombia’s president-elect Ivan Duque has urged South American leaders to leave the Union of South American Nations (Unasur), the only regional integration body with no United States presence and promoted the interventionist Organization of American States (OAS) as a viable alternative to the body during the final leg of his trip to Washington.

“I expressed my desire to continue to strengthen the Inter-American system, and in that sense South American countries have much to do, the first thing is to invite countries to leave Unasur, which has really been an organization that has become an accomplice to Venezuela’s dictatorship,” Duque said Friday in a press conference after meeting OAS Secretary Luis Almagro.

In April, six of Unasur’s 12 member states announced they were “temporarily” withdrawing from the regional integration body, citing concerns over the inability to appoint a new Secretary General since former Colombian President Ernesto Samper’s term came to an end as Secretary General in January 2017.

Duque’s comments reveal an agenda to turn the “temporary” withdrawal of these countries into an event, which would lead to the dismantling of Unasur. Something Samper warned against, arguing the U.S. would love to only have the OAS.

Duque discussed his economic program and the country’s Flexible Credit Line with the IMF with Lagarde and confirmed Colombia’s “solid relationship” with the U.S. in his conversations with officials.

Earlier this week Duque announced he had President Donald Trump’s support for a proposed “head-on fight against drug trafficking,” which includes the forced eradication of coca plantations and the aerial spraying of pesticides over coca-growing regions.

Duque was elected on June 17 after consisting the election on behalf of the Democratic Center, the party founded by former president Alvaro Uribe. Uribe is currently under investigations over links with paramilitary groups and at least three massacres.