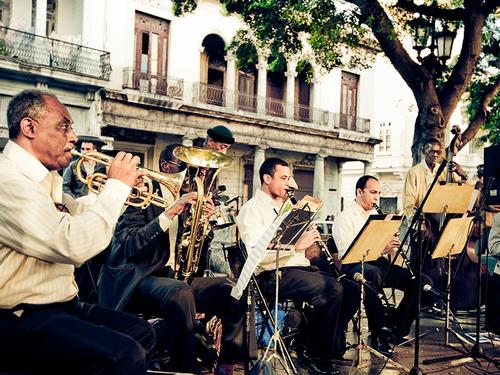 As the United States begins restoring its historic ties to Cuba, the Free Library of Philadelphia is reaching out as well—by sharing its unique collection of some of the island nation’s nearly forgotten classical music compositions.

“Cuba has a priceless musical tradition that is integral to its national pride,” says Edwin A. Fleisher Collection Curator Gary Galván, who has visited Havana twice this year in an effort to return Cuban works to the orchestra stages of their native land, as well as to bring new Cuban works to the United States and the world.

The Library’s Fleisher Collection—the world’s largest lending library for orchestral performance sets—is the largest and one of the most important repositories of Pan American works in the world. Among its holdings are 24 Cuban scores once thought lost or missing that represent the work of 14 composers.

One of the long-missing pieces is Edgardo Martin’s Concerto for Horn and Orchestra, a beautiful 100-page conductor’s manuscript meticulously hand-copied by Venancio Flores, Fleisher’s personal music copyist. Martin (1915–2004), a teacher, critic, and esteemed composer, was known for his dance-like cross rhythms and syncopated Latin sound.

The manuscript was composed from published parts and intended for use by the pioneering Symphony Club—the fi rst training orchestra in the United States, which was founded by Fleisher. It is, says Galván, a short, “attainable” piece with characteristic Latin rhythms and “a distinct Cuban accent.” He adds that it represents the type of bright, poppy music that has the ability “to bring new faces, different faces into the concert hall.”

The concerto represents a piece that was simply lost to time, but other Cuban pieces in Fleisher—such as Homenaje a la Tonadilla by Julián Orbón and Obertura una Farsa Seria by Aurelio de la Vega—represent works that were banned when their composers left Cuba in the wake of the Revolution. Today, Cuba is welcoming back these pieces with open arms.

As Galván shuttles back and forth to Havana to meet famed composers’ descendants, converse with living composers, and secure reprinting rights, the works that are inspiring him will be on display back at the Library.

The special installation, Alma Vieja/Alma Nueva (Old Soul/New Soul), will feature an assortment of these rare classical Cuban manuscripts, as well as links to online audio recordings of other Cuban classics.

Galván’s ultimate goal for the uncovered pieces is to inspire simultaneous concerts of the same works by orchestras in Havana and the States, preferably in Philadelphia, he says.

“The Cubans are immensely excited about our work to revisit and resurrect a vital part of their musical history and culture,” reports Galván. “Our efforts there are the perfect complement to any diplomatic initiative.”

Alma Vieja/Alma Nueva will be on display in the hallway cases outside of the Fleisher Collection from January 1 through April 30, 2017 and will be accessible during Parkway Central Library public hours.

This story was originally featured in our Fall 2016 issue of Off the Shelf, a biannual publication with news and features from across the Free Library of Philadelphia system.