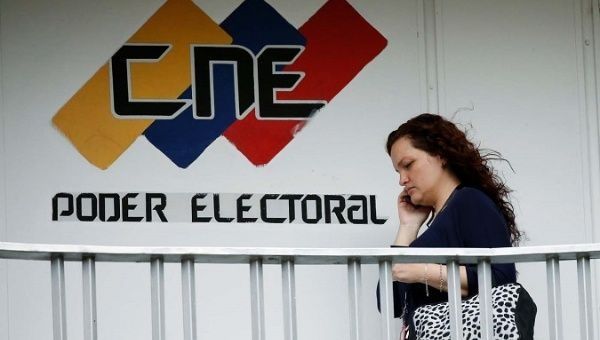 The logo of the Venezuelan election authorities CNE | Photo: Reuters

The National Electoral Council (CNE) said that the rehearsal was underway in tranquility and with broad participation.

Nov 11 (teleSUR) Venezuela held an electoral simulation on Sunday ahead of the coming elections scheduled on Dec. 10 involving 335 municipalities.

Between 8 a.m. and 3 p.m. local time, voters were invited to try the 1.154 machines deployed across the country by the country’s National Electoral Council or CNE.

CNE’s vice-president Sandra Oblitas stated that the simulation went “with normality and without incidents” after the vote, highlighting a high turnout.

Venezuela’s Foreign Minister Jorge Arreaza praised the initiative and encouraged foreign countries to respect Venezuelan democracy. “Despite all the challenges we are still demonstrating and accomplishing our democracy, every minute, every hour, every day,” he said.

The Venezuelan electoral system is the only one in the world that has a fingerprint verification and is the most audited in the world.