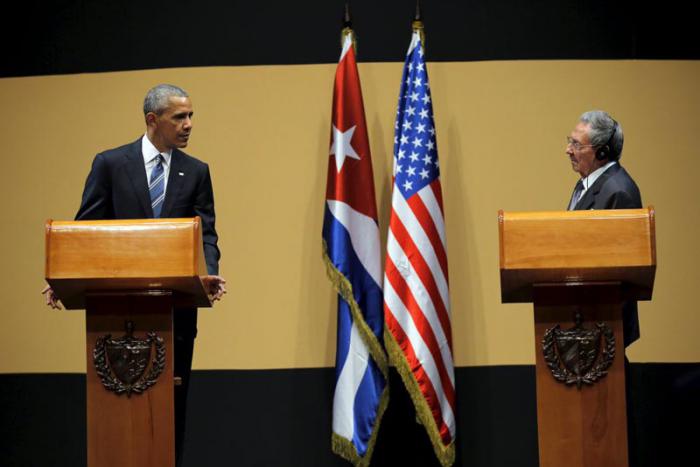 HAVANA; Cuba, Mar 21 (acn) The blockade is the most important obstacle for the economic development and well-being of the Cuban people, therefore its elimination will be essential to normalize relations with the US, Cuban president Raul Castro said today.

In statements to the press, after holding talks with his US counterpart Barack Obama, Raul noted this unfair policy, imposed on the island over 50 years ago, is still in force, it has dissuasive components and intimidating effects with extraterritorial reach.

He acknowledged that the Obama administration has asked the US Congress several times to lift the blockade, while describing as ¨positive but not sufficient¨ the latest measures adopted by the White House to try to modify aspects of this economic war.

He added that its lifting will also be beneficial for the Cubans living abroad that wish the best for their families and their country, and for that reason he made a call for bigger steps for its complete elimination.

The Cuban president said that during the talks with Obama they discussed the devolution of the illegally occupied in Guantanamo, another hurdle for the full normalization of relations.

He added that within 15 months after the announcement of the decision to restore diplomatic relations ¨we have had important results.¨

Besides mentioning specific agreements, like the restoration of the direct mail, he announced that today Cuba and the US will sign one on agriculture, and that currently they are negotiating a group of bilateral instruments to cooperate on the fight against drug trafficking, on safety and commerce.

Regarding health, Raul said they agreed on deepen the ties on the joint work against Zika, and chronic non-transmissible diseases, including cancer.

He told Obama that Cuba keeps its commitment to continue moving on the road to the normalization of relations ¨for the sake of our countries and peoples.¨

He insisted on keeping a dialogue despite political and ideological differences, and that the decision to change everything that needs to be changed is a sovereign issue of the Cuban nation.

Both countries should cooperate and coexist in spite of the differences in terms of peace, safety, political stability, development and equity in our continent.

¨We have traveled a long road, that´s why is important to have started taking steps to establish a ¨relation of a new kind¨ he concluded.