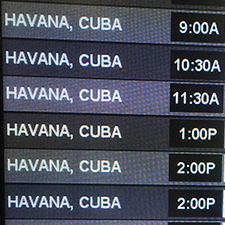 Charters leave Miami for the 45 minute flight to Havana daily.

History is filled with moments in time when nothing that was will ever be the same again, and it appears Cuba is now at one of those pivotal moments. Ever since the sweeping changes in U.S.-Cuba relations that President Barack Obama announced last year took effect in January, the island has been on the mind of many Americans eager to visit.

Questions remain, though, regarding how a person exactly handles booking a vacation to Havana. What constitutes legal travel? What should I expect from the hotels? Are the restaurants any good? What’s the best way to purchase Cuban cigars? Fortunately, Cigar Aficionado has been going to Cuba for more than 22 years and has the answers.

Before you schedule your visit to Cuba, check out the June issue of the magazine where we bring you the ultimate travel guide to the largest island in the Caribbean. For a preview of the expert advice in the issue, look below.

If you’re not a U.S. citizen, going to Cuba can be as simple as calling your travel agent. For Americans, the trip requires more work—as well as a visa. Here are guidelines on how to visit Cuba.

The 12 Categories—There are 12 categories of authorized travel to Cuba for U.S. citizens which now fall under general license, meaning you no longer need specific permission, but simply have to sign an affidavit stating that you are complying with the rules. The categories include those with family members in Cuba, journalists, people on official government business or scheduled for a public performance and visits based upon educational, religious and humanitarian projects. The list can be found at www.whitehouse.gov/.

People-To-People Visits—Normal travel to Cuba by U.S. citizens remains prohibited, but one of the dozen categories is the people-to-people visit. These are trips led by licensed organizations (such as Insight Cuba, Academic Travel Abroad, Road Scholar and Globus) who handle all aspects of your visit and manage your itinerary, which you need to follow to stay within the law. Interest in such trips is higher than ever, however, they require a full schedule of educational-exchange activity. The provider risks the loss of its license if participants stray very much.

Visits Via A Third-Party Country—Flights to Cuba from such countries as Canada and Mexico abound, but the U.S. Treasury Department warns “A Cuban vacation package that is prepaid by U.S. travelers through a travel agency located in a third country does not qualify as ‘fully-hosted’ travel,” regardless of the currency used to pay.

Flights—Yes, you can fly direct to Havana from American airports, if you meet the qualifications for travel. On one day in February, six flights from Miami International Airport to Havana were on the departures board. These are charter flights—look for those who charter from well-known carriers, such as American Airlines.

Go With The Pros—Even with a storehouse of information, Cuba can be a confusing place. It pays to have help. Travel agents in country (such as InCloud9 and Cuba Travel Network) can smooth rough edges. Visit incloud9.com or cubatravelnetwork.com.

And When You Leave…—If you do get to Cuba, remember that the country charges a 25 cuc ($28.75) exit tax, which you must pay before being allowed through security to get on board your departing flight home. Remember to save some cash.

Credit Cards: Will Your Plastic Work in Cuba?

Changes in American law have made U.S.-backed credit cards legal in Cuba—but will they work? Legal is one thing, functional is another, and the bitter truth is that most venues in Cuba just aren’t ready for plastic—American or otherwise. In addition, the change in law is so new that many cards aren’t geared to work in Cuba just yet. We reached out to the major credit card companies to see what would happen if you try to use American-backed plastic in Havana.

MasterCard—American MasterCards began working in Cuba on March 1. The company “removed its network block on U.S.-issued card transactions in Cuba as of March 1, 2015,” says MasterCard’s Jennifer Stalzer. “Since that announcement, we’ve worked with our U.S. issuers to support their Cuba-related activities and decisions.”

Despite the changes, Stalzer counsels that an American traveller to Cuba should reach out to the bank backing their card to make sure it will work.

Visa—Visa’s customer service informed an American cardholder that its debit and credit cards won’t function in Cuba. Visa’s corporate office didn’t respond to repeated requests for comment on the issue.