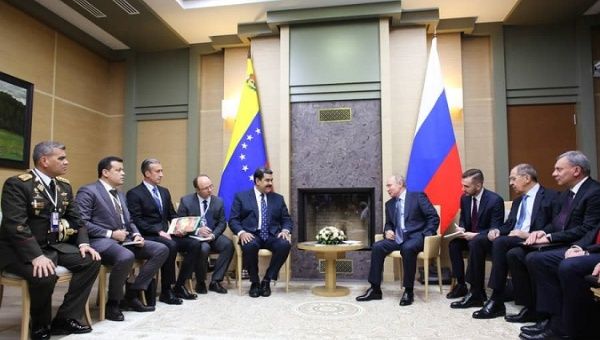 President Putin described intervention by other states in Venezuela as an act of terrorism during a meeting with Venezuelan President Nicolas Maduro.

Dec 5 (teleSUR) Venezuelan President Nicolas Maduro and his Russian counterpart Vladimir Putin met in Moscow Wednesday during which Putin condemned the intervention of capitalist hegemonic states in Venezuela to change its current political scenario by force.

“Of course, we condemn any action that is clearly of a terrorist nature, any attempt to change the situation with the help of force,” Putin added.

Maduro expressed that he was “very happy” to be in Russia, adding, “we are standing and winning”.

The Bolivarian leader also said that Venezuela has found “the point to launch and activate a comprehensive economic program” which will be in perfect alignment with the vision and economic cooperation between Moscow and Caracas.

Maduro arrived in Russia Tuesday to review and deepen the economic agreements between the two states.

“We will develop strategic issues for our countries within the framework of our Bolivarian Diplomacy of Peace and the construction of a multipolar world,” Maduro wrote on Twitter before meeting Putin.

The leaders also addressed the development of bilateral trade relations and cooperation strategy between the two countries.

Both the countries, in the past 15 years, have signed more than 206 agreements in various fields such as medicine, tourism, agriculture, mining, and oil.

Before the meeting between the leaders, Kremlin told reporters that trade and economic cooperation would be the top agenda of the meeting.

Russian presidential aide Yuri Ushakov told reporters Tuesday, “Practical aid is provided to the Venezuelan side on a regular basis. The issue [concerning help] will be definitely put forward this time.”

In addition to his meeting with the Russian leader, President Maduro will participate in the closing of the High-Level Commission Russia – Venezuela. Also, the largest oil company in the European country, Rosneft, which has expressed interest in working with Venezuela, reported that it will also meet with the Latin American leader.