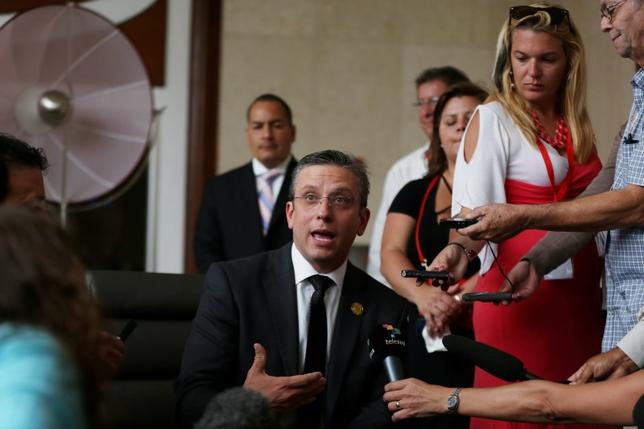 Puerto Rico has taken the first steps toward opening a commercial office in Cuba, Governor Alejandro Garcia Padilla said on Saturday, on the sidelines of a Caribbean summit in Havana.

Garcia Padilla is the first sitting Puerto Rican governor in history to visit Cuba, a “privilege” he said, telling journalist that local officials and the public had treated him warmly.

Garcia Padilla arrived in Havana on Thursday to attend as an observer Saturday’s summit of the Association of Caribbean States, which includes as members and associate members virtually all Caribbean Basin nations, as well as a number of islands that are not independent.

“We have had meetings with various ministers, and last night I had the opportunity to share some words with President Raul Castro,” Garcia Padilla said.

“We had on the agenda and achieved taking the first steps to open an office of Puerto Rico in Havana. What these offices do is promote trade and cultural exchanges,” he said.

Puerto Rico has experienced a decline in tourism due to the Zika epidemic. It is expected to suffer further when U.S. tourism opens up with Cuba.

Garcia Padilla said while Zika was a threat to pregnant women and those planning to become pregnant, it otherwise represented no danger for visitors,

Public health, and in particular efforts in both countries to stem the spread of the Zika virus, was nevertheless on the governor’s agenda.

“We had some initial discussions about how we can help each other … as we always do with Caribbean countries to deal with natural disasters,” Garcia Padilla said.

Although a number of U.S. governors have visited Cuba since the two countries announced détente in December 2014, restored diplomatic relations six months later and began talks on a multiple of issues, Puerto Rico has a special significance for both countries.

The two Caribbean islands were Spanish colonies until the Spanish-American war of 1898, when they passed over to the United States. Cuba was quickly granted independence, while Puerto Rico remained an unincorporated territory and in 1952 became a commonwealth of the United States.

Since the 1959 Revolution, Cuba has made support for Puerto Rican independence a key part of its foreign policy despite repeated votes in Puerto Rico to maintain its status.

“The future of Puerto Rico depends on Puerto Ricans, just like Cuba’s future depends on what the Cubans decide,” said Garcia Padilla, who does not favor independence.