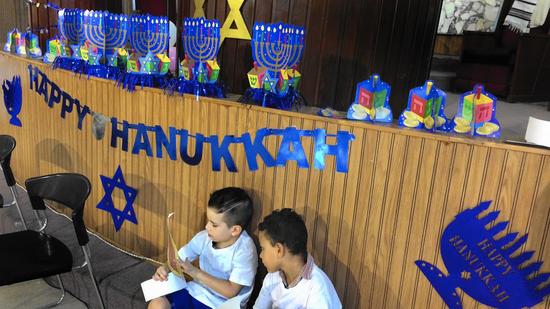 Jews here are celebrating the holiday with an air of optimism long in coming. The opening of diplomatic relations between Cuba and the United States, along with the release from jail of Alan Gross, a U.S. Agency for International Development subcontractor who is Jewish, has energized a dwindling community that struggles to survive.

“This was a Hanukkah miracle,” said Adela Dworin, president of the Jewish community based at Temple Beth Shalom. “It was about time.”

Teens danced to klezmer music in the celebrations Sunday night, which saw the kindling of the sixth of eight candles in an ornate silver menorah. Several hundred people filed into the sanctuary, men with colorful kippa, children with construction-paper likenesses of candle flames on their heads. Hanukkah, an eight-day holiday also known as the Festival of Lights, represents a 2nd century rebellion of Jews against their oppressors in territory that is now Israel.

Only about 1,500 Jews remain in Cuba, two-thirds of them in the capital, where there are three temples. 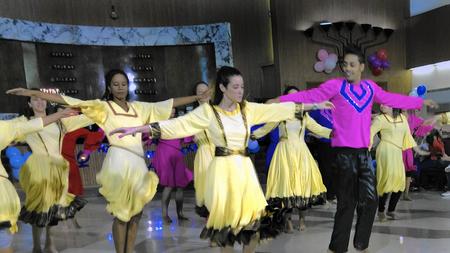 Jewish leaders made a point of visiting Gross during his five years in prison and a military hospital, especially during Jewish holidays such as Passover and Rosh Hashana, when they would take him latkes, chocolate or a menorah.

“We tried to help him maintain his tranquillity and his faith as a good Jew,” said David Prinstein Señorans, another senior leader of the community.

Dworin said that in Gross’ darkest moments of desperation, especially toward the end, he spoke of not wanting to live anymore.

“I reminded him our religion prohibits suicide; I’d like to think we planted a grain of sand and raised his spirits,” Dworin said in an interview after Sunday night’s Hanukkah celebrations. “We never would abandon a fellow Jew, whether you agree with his way of thinking or not.”

By March of this year, she said, Gross no longer wanted visitors, his depression that severe.

When he was first arrested for importing satellite and other sophisticated electronic equipment, there were reports that Gross was providing the material to the Jewish community. Cuban Jewish leaders quickly distanced themselves from that claim and say now that there was no formal relationship between the community and Gross in terms of providing Internet or other communications supplies.

“The Cuban government knew we were never involved; it would be ridiculous,” Dworin said.

Jewish leaders say that, despite their diminished presence, their relations with the Cuban government are good. They noted a Hanukkah visit to the temple a few years ago by President Raul Castro, who participated in the candle-lighting. In 1998, then-President Fidel Castro also dropped by in what was considered a groundbreaking gesture by a government that officially for years was atheistic and did not encourage free religious observance.

“Our synagogues are open, and we don’t need police guards,” said Fidel Babani, another prominent member and former president of the community.

Before the 1959 revolution, Cuba had a booming Jewish population, estimated to number at least 15,000. Jews had lived in Cuba since the era of the Spanish Inquisition, with a large influx in the early part of the 20th century from Europe and the Ottoman Empire.

The post-revolutionary communist government’s decision to nationalize businesses and seize many properties drove many Cubans, including Jews, into exile; others feared the official atheism of the ruling party’s early years. It was what Jews at the time called a migration stampede.

By 1989, considered the lowest point, there were fewer than 800 Jews left. The number has been on the rebound in recent years; it is no longer difficult to assemble a minyan, the 10 males required to hold a religious service, Babani said.

Still, no rabbi lives in Cuba. The person officiating over Sunday night’s ceremony was not an official rabbi; one visits periodically from Argentina.

“We hope the normalization [of diplomatic relations with the U.S.] means Cuban Jews will return and more Jewish groups will visit,” said Prinstein. “It is no secret: We live thanks to help from abroad.”