(SAN FRANCISCO) – It is unfortunate that the debate about the prisoner swap — U.S. Army Sgt. Bergdahl for 5 Taliban officials — disregards or at least minimizes the fact that prior to the swap, there were 149 still imprisoned at Guantánamo Bay Detention Camp, of which 78 are still imprisoned after being cleared for release and 38 the U.S. has said it lacks evidence to prosecute but claims they are too dangerous to release. 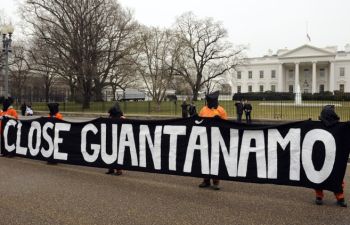 Guantánamo has a reputation as a place of torture and indefinite detention, and is a continued international embarrassment. It is time for President Obama and Congress to agree on a plan to quickly release these prisoners or bring them to a speedy trial, and then close Guantánamo.

The U.S. occupation of Guantánamo dates back to the passage of the Platt amendment to a U.S. Army Appropriations Bill of 1901, which gave the U.S. the right to intervene militarily in Cuban affairs whenever the U.S. decided such intervention was warranted. Cubans were given the choice of accepting the Platt Amendment or remaining under U.S. military occupation indefinitely.

The U.S. has intervened militarily in Cuban affairs at least three times. U.S. intervention endowed Cuba with a series of weak, corrupt, dependent governments until the triumph of the Cuban revolution in 1959.

In 1903, the U.S. used it to obtain a perpetual lease of Guantánamo Bay, a blatant example of U.S. gunboat diplomacy. The current Cuban government, as do I, consider the U.S. presence in Guantánamo to be illegal and the Cuban-American Treaty to have been procured by the threat of force in violation of international law.

In 2013, President Obama promised to recommit himself to his failed promise to close the Guantánamo Bay prison although such action still faces opposition by both parties. However, the Obama administration has never exercised the power it has had since 2012 to waive, on a case-by-case basis, most of the restrictions lawmakers have imposed on transferring detainees.

There is still opposition, however, to transferring them to U.S. soil. But there are some prisoners deemed to risky to release but not feasible to prosecute because torture was used. These prisoners are essentially being held as prisoners of war.

Considering our pullout from Iraq and Afghanistan and the weakening of al-Qaeda, it time to release all prisoners held at Guantánamo and return Guantánamo back to Cuba.