Posted on January 6, 2018 by Anthony Brenner

The EU official expressed harsh criticism of the ongoing trade blockade waged against Cuba by the United States.

Jan 5 (teleSur) Cuban President Raul Castro met with the European Union’s top diplomat, Federica Mogherini, at the end of her two-day visit to the country, seeking to construct and reinforce ties between EU member countries and Cuba.

During a press conference, Mogherini emphasized the importance of Cuba’s ties with the EU, in the midst of US President Trump’s efforts at further isolating the nation economically and politically. She said that EU member countries combined are now Cuba’s most important trading partner.

“The EU has become Cuba’s first trade partner and was already the first in investment and development cooperation… which means it is possible to increase the level of economic relations and investments,” she said.

When relations between the United States and Cuba began to thaw in 2015 and 2016 through dialogue with the Barack Obama administration, the EU followed, subsequently dropping all sanctions and vastly expanding its economic cooperation with the Caribbean nation.

A delegation from the European Investment Bank will visit Cuba later this month, and in February, Rodriguez will preside over the first joint cooperation meeting between the EU and Cuba in Brussels.

Following her meeting with Rodriguez, Mogherini said that agreements in renewable energy development, sustainable agriculture, and expertise were being prepared, valued at US$59.1million.

She also expressed harsh criticism of the ongoing trade blockade waged against Cuba, and the Trump administration’s refusal to diplomatically engage. 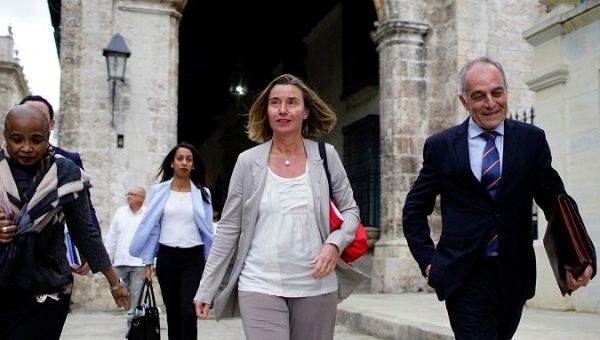