President Maduro Demands an End to Corruption in PDVSA 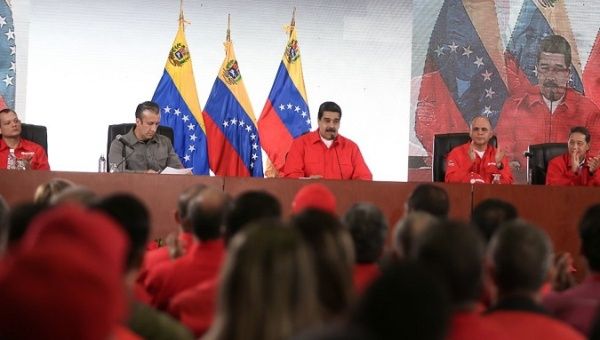 Corruption is one of “the evils associated with oil capitalism.” | Photo: @PresidencialVen

The Venezuelan leader announced a deep revolution of PDVSA to end corruption and turn it into a productive company at the service of the people.

Nov 28 (Telesur) Venezuelan President Nicolás Maduro demanded on Tuesday an end to corruption, given the numerous arrests for irregularities within the state-owned company Petróleos de Venezuela (PDVSA) and its subsidiary Citgo, in the United States.

During a meeting held with oil workers, at the headquarters of PDVSA, in La Campiña, Caracas, the president said that the anti-corruption operation aims to turn the oil company into a power at the service of the nation’s economic development.

“November 27 is the starting point for the new stage of transformation of PDVSA,” he said, emphasizing that “the time has come for a great clean up in PDVSA together with the working class, together with the FANB (Bolivarian National Armed Forces ) and with the people “.

“They forgot that the only owner of the oil industry is called: the people, noble and sovereign of Venezuela,” said the head of state.

At the beginning of the event, President Maduro announced that he had appointed as vice president of PDVSA, the lawyer and political scientist Ysmel Serrano, who, along with the new president of the company, Manuel Quevedo, will be sworn in on Tuesday.

President Nicolás Maduro denounced that the government of the United States was behind a “silent stoppage” of the oil industry, which would be executed with the complicity of the mafias within PDVSA.

In addition, he assured that his government possesses the evidence of how corruption mafias emerged within the oil sector.

“I authorize the Executive Vice President (Tarek El Aissami) to explain to the country all the evidence we have against this pile of mobsters and bandits who believed that PDVSA belonged to them,” he said.