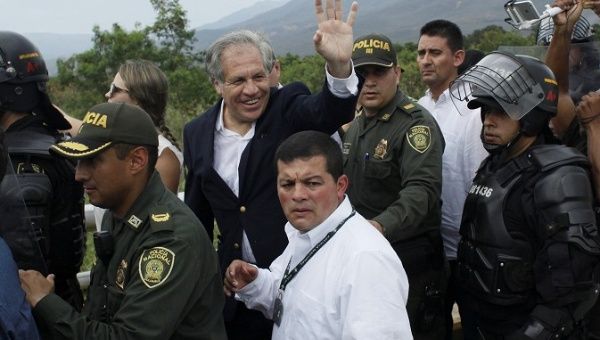 Sept 16 (teleSUR) Organizations and political leaders are rejecting statements by the Secretary General of the Organization of American States (OAS), Luis Almagro, for inciting military intervention in Venezuela.

Last Friday, Almagro who ended a three-day visit to Colombia said from the border city of Cucuta: “As for a military intervention we should not rule out any option. … Diplomatic actions are in the first place, but we must not rule out any action.”

“These statements are clear evidence of Secretary-General Almagro’s continual destabilization and intervention against the democracy and sovereignty of progressive governments in the region,” said the Executive Secretary of the Bolivarian Alliance for the Peoples of Our America – People’s Trade Treaty (ALBA-TCP) in a statement released Saturday.

ALBA-TCP also emphasized that Almagro’s words, “seek to deepen and sharpen the attacks that some governments in the region have been developing against Venezuela.”

The intergovernmental organization comprising 10 Latin American and Caribbean nations including Venezuela, ALBA, added in its communique released that Almagro overstepped his post in alluding to military intervention in the South American country which “contradict the basic principles of International Law and of the OAS Charter itself.”

Cuba’s embassy in Venezuela tweeted that the OAS leader is threatening regional peace and should be denounced by the international community.

Bolivian President Evo Morales said the Lima Group, a bloc of right-wing Latin American governments that once had called for Venezuela to suspend its presidential elections last July, is letting Almagro call for a “coup d’état” against Venezuela.

“The Lima Group rejected the military intervention against Venezuela and left Luis Almagro, slavish agent of the Empire, all alone with his coup plotting obsession. It is a defeat of Trump’s interventionism and a victory of dignity and courage of Venezuela and Latin America,” tweeted the Bolivian head of state on Sunday.

The Communist Party of Uruguay, Almagro’s home country said, “this is a new sample of servility and irresponsibility of Almagro, long transformed into a pawn of Yankee imperialism, in the service of the worst things.”

The party added: “(Almagro) acts as an operator for Trump, Pompeo …, and Colombia, which just entered NATO and his U.S. military bases in its territory. ” teleSUR correspondent from Uruguay reported that the country’s communist party will ask for the expulsion of Almagro from his post.

Almagro made these loaded statements days after an article in The New York Times revealed clandestine contacts between the Donald Trump administration and a faction within the Venezuelan military in an effort to carry out a coup against President Maduro.